It's June! Plus a Weekend Recap

Good Monday morning to you! Can you believe it's June already? Where does the time go? I feel like I'm always saying that, but seriously. Life is on warp-speed setting, and I can't seem to slow it down.

June is host to my first half marathon of the year, the Garry Bjorklund Half Marthon in conjunction with the infamous Grandma's Marathon. I have a goal time in mind, but we'll see what happens. I'm hoping the weather is a little nicer than last year. It was cold, misty, and foggy the entire race in 2014. While I don't want it to be hot, a little sunshine would be nice! Given our weather this weekend though, cold is a possibility. This weekend we had low's in the 30's and a high yesterday of barely 60 degrees. I don't mind cool weather, but when it's that cold at the end of May...enough already! But maybe if this could continue for my race...that wouldn't be so bad.

We had a pretty uneventful weekend, which is always ok with me. Friday afternoon I picked up our first CSA share. We'll be picking up every Friday through the summer, so it's a little like Christmas! Since our growing season starts a bit later here in northern MN, the farmer doesn't have much produce yet. Just spinach and rhubarb. I opted for 2 bundles of spinach since I'm not a big fan of rhubarb. They supplemented with 2 pounds of ground pork, and a dozen eggs. 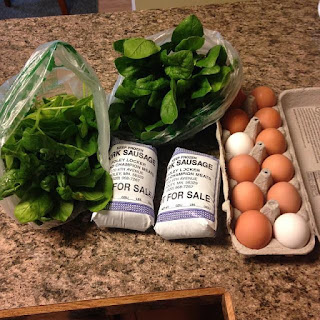 We've already made a big dent on the spinach, and used half the eggs. I know that we already paid for this food, but it kind of feels like we're getting free stuff! Love it!

Saturday Emily and I went out to lunch at a local golf course with a friend that I used to work with. We had a nice visit, and Emily was really good, considering we were there for almost 2 hours. We sat inside, but had a nice view of the course and the "waterfall", or fountain in a pond outside. Emily enjoyed watching the golfers come and go. Then we did a little shopping, but we both started to fade pretty fast. By the time we got home, I was more than happy that Emily wanted to veg out on the couch and watch Peter Pan.

Sunday I woke up with the sun to get 13 miles in. I planned to meet up with 2 other members of my running group. One of which wanted to do 13, the other needed to get 22 miles in before his next marathon in a few weeks. Needless to say, he left us after a few miles! But it was nice running with someone else for the entire run; the miles really fly by. I'm starting to get worried that my next solo long run will be a bear without the distraction!

Afterwards, I was all about relaxing. I use these ProCompression socks for recovery, and had to giggle at how bright my orange socks are. 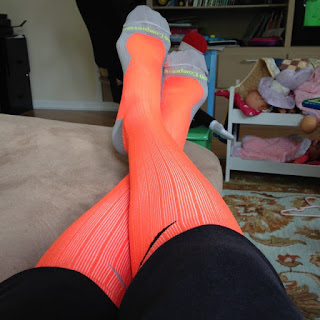 Hello safety orange! I posted this pic on facebook with the caption "and tomorrow I'm applying to be a school crossing guard".

We ended the night with a little vino and popcorn, and the movie "Chef", with Jon Favreau and John Leguizamo. It was pretty good, funny, and just made us hungry!

What are your June goals? How is the weather in your neck of the woods?
Posted by Ali at 6:46 AM