My book club pick for the month of June was Still Alice by Lisa Genova. The story is about Alice Howland, a Linguistics professor at Harvard, who is diagnosed with Early Onset Alzheimer's Disease. 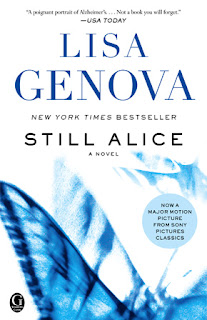 The reader meets Alice early on, when she just starts to have some memory trouble. She forgets the word she wants to use, she misplaces small items, or forgets a meeting. Small things that happen to us all when life gets busy and hectic. Alice chalks these things up to menopause at first, and goes to see a doctor about it. It isn't until she gets lost on a run, forgetting where she lives on a very familiar route, that she starts to think something more could be wrong.

After a few rounds of testing, she is diagnosed with Early Onset Alzheimer's Disease at the age of 50. She struggles with telling her husband and her three adult children, because cognitive prowess is so highly regarded in her family. Her husband is also a professor at Harvard, her son a doctor, and her daughter a lawyer. When Alice starts a seemingly rapid downward spiral into the disease, she finally does tell her husband and they tell their children together. Alice realizes that they may want to be tested for the disease.

The novel becomes about finding what truly matters to you in life. What would you spend your time on if you knew you only had years, or even months, left to remember it all? With the help of her youngest daughter, the wild-child, carefree and full of life, I thought that Alice really did a 180 from who she was when the book started.

My book club had such a great discussion with this novel! Whether you know someone with Alzheimer's or not, I really think that anyone can relate to this book. Genova does a great job putting you in Alice's shoes so that you can really understand the frustration that she is going through. The fear of losing yourself.

We talked about whether or not we would get tested for Alzheimer's. Having the disease on both sides of my family, there is a very real possibility that I could have it as well. There are often times when I do forget something small, whether it be a name or a detail, and it makes me wonder - is this just a memory slip? Or is it more? Genova does a great job at making the reader take a step back to analyze their own life, and think about what is really important to them.

The book was also made into a movie recently, staring Julianne Moore. Although the film was good, several of us that had seen the movie agreed that the book was so much better. The movie just skims the top layer, whereas the book gives you so much more detail and "meat". Since the book is not very long, I definitely recommend it over the movie.

For more information about Alzheimer's Disease, go to the Alzheimer's Association website to learn more.