Screw that. Is Monday over yet? I am not having a great Monday morning. Woke up with a headache, super tired from said headache, and the humidity today is putting a serious damper on my hair.

But we had a great weekend!

Saturday morning started out with my long run. A first for me - 14 miles! 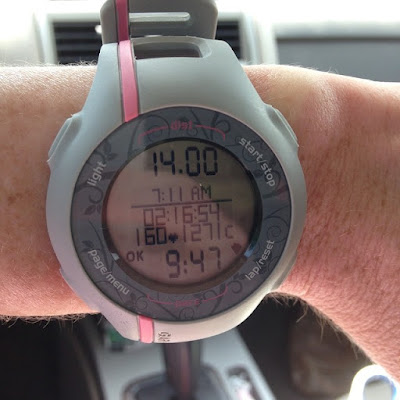 Then I had to go grocery shopping when I went home. By the time lunch rolled around, I was seriously ready for a nap. Even after a nap, I was pretty tuckered out so we just stayed home for the rest of the night.

Travis rented 50 Shades of Grey for us to watch on Saturday night. Because apparently he doesn't get sarcasm. I was totally lying when I said "oh, we could get 50 Shades of Grey...or American Sniper!" Guess which one he came home with? Complete waste of money & time.

Sunday morning we woke up to rain & overcast skies. So Emily and I (mostly I) made homemade peanut butter.


She conveniently showed up right at the end when I was scooping the peanut butter into a mason jar for storage. But she liked it! "Kid Tested, Mom Approved".

Side note: I made the PB with locally produced honey that I bought at our Farmer's Market. I felt like such a hippy! It's creamed honey, so it's more like a butter spread almost. It made the peanut butter very light and fluffy. We love it!

A friend of mine invited me over to watch the movie version of Still Alice, since we had just read it for book club this month. If you're not familiar with the book or movie, the story is told from Alice's point of view as she struggles with early onset Alzheimer's disease. Alzheimer's runs in my family, so this was particularly interesting for me but also incredibly heartbreaking. I'm proud of myself that I didn't cry during the movie, but I sure did while reading the book!

Once I got home, the weather had really cleared up. I told Travis that I absolutely did not want to stay home and make soup for dinner, which is what we had planned. Instead, we jetted off to Grand Rapids to eat at Zorbaz on Lake Pokegama. It's kind of a rowdy place that serves pizza & Mexican food, but it was really nice sitting outside and enjoying the atmosphere. 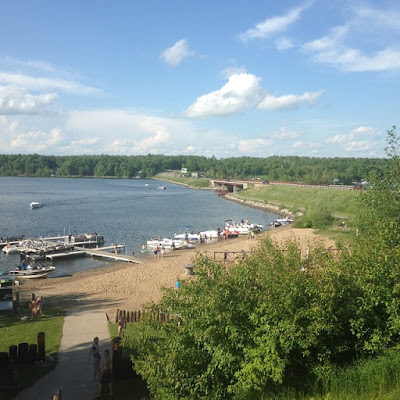 They had a volleyball tournament going on down at the beach, and there were tons of boaters out. Afterwards, we went to CherryBerry for dessert. It's a serve-yourself froyo place. That's fun for Emily since she can put all sorts of stuff on her yogurt. Personally, I don't like their frozen yogurt. I'd rather have the real thing!

We got home kind of late, so it was bath time and bedtime - for Emily and I both! I'm pretty exhausted this morning from all our fun this weekend. How is it that some weekends seem relaxing, but end up jam packed anyway?

How was your weekend? Do you like frozen yogurt or ice cream better?
Posted by Ali at 7:09 AM