The shower is done! DONE! I can take a shower in it tomorrow! 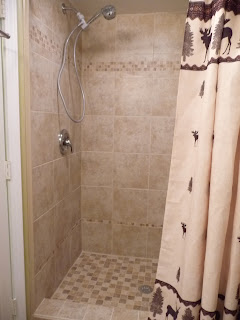 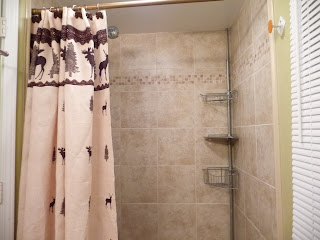 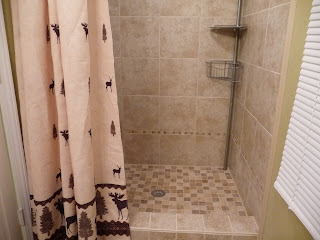 Aren't you impressed? I sure am! And beyond excited!
Posted by Ali at 8:14 PM 1 comment:

Friday was our big anatomy scan, and surprise! We're having a girl!!

I was so, so shocked because every bone in my body thought this was a little boy, but I guess she proved me wrong!

We had to drive down to the cities because my doctor likes her patients to see a specialist in ultrasound technology. She doesn't trust our small-town radiology department I guess. So of course we'd rather be safe and sorry, and we took the day off to make the 4 hour trip down.

The ultrasound itself was beyond amazing! They can see and do so much with technology now. We were able to see her brain, her spinal column, and her little heart pumping away. He was even able to show us in color the blood pumping in and out of her heart. Everything looks good and she's right on track! We got to see her little hands and feet, all toes and fingers accounted for. Here are some of the shots: 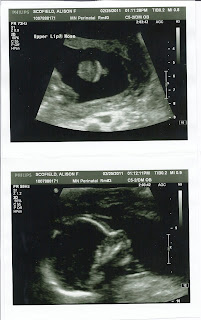 The top is a sideways shot of her nose and lips, and the bottom is her profile. 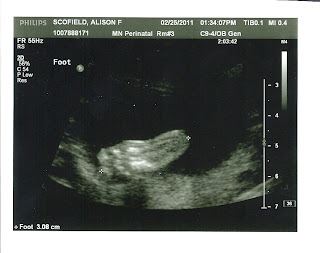 There's her little foot! He said it measures about 1 3/4 inches right now. That's so tiny!

The next big question is if we've picked a name. We've had names picked out for months so this is an easy one! We've decided on Emily Faith. Faith is my middle name, and my Dad always said they picked that because they had faith that God would take care of me and make me healthy. Of course we hope and pray for the same thing! Emily has been a long time favorite name of mine, and is one of the few that we can agree on!

On our way back from the cities we stopped at an outlet mall along the way to look at some baby clothes. Ok, well, I had every intention of buying stuff :o) At one point Travis said "you know she can wear other colors besides pink, right?" Haha! Yes dear, we can mix in some other colors. I've been happily spending the day online window shopping for nursery ideas. I think we're going to go with a light pink and brown, French "shabby chic" look. I even found a website that I can purchase a floor to ceiling Eiffel Tower wall decal. This is going to be one fabulous little girl's room!

In other news, Travis is finishing the shower as we speak. Hopefully I'll have pictures before the night is over. I'm ready to be showering in my own shower!
Posted by Ali at 4:32 PM 1 comment:

Spring? Is that you?

I'm in disbelief. While we don't have roses and grass popping up yet, it is a balmy 41 degrees right now on the Iron Range. Can you believe that!?!? The snow on the roads is starting to melt, and I can actually see blacktop out there. One thing I'm not prepared for though: all that mud. We've had tons of snow this year, which means my dirt driveway is going to be a muddy river when everything actually starts to melt. Travis is currently outside trying to take snow off the roof of our garage. It didn't look like that much, but I think it's actually like 2 feet of snow up there. Holy moly! Look out river towns: this spring is going to be flood city.

A lot has changed at work since my last post. The former CEO's daughter has stepped into his place and is now running the company. She is a mother of two and so much easier to talk to, so I let her know right away that I was pregnant. All she said was "oh congrats! That is so exciting!" So that's a big weight lifted off my shoulders.

Since Travis has to be at work much later that I do, we began driving separately. This led to spending around $140 a week in gas. A week!!! Any increase we saw in our net income from my raise went straight into the gas tank. So I asked our new CEO on Friday how she felt about me working from home again, and she said yes! As of Monday, I'm a work-from-homer again! That will save us $280 a month, hooray! Travis is also going to start doing some office work as well. He had gotten to the point where he was only working 4 hrs a day, which, in my opinion, is a waste of time for the drive time and gas money spent. So we talked to the new boss and she was more than willing to give him some more hours, plus they need the help!

This week we also got the second piece of our nursery furniture: our dresser/changer combo! It's basically a dresser that you can attach a changing pad to on top. We also have a hutch to go on top of the dresser when baby is out of diapers. It came assembled though, so I have no clue what to do with it for the next 2+ years. It is currently sitting in our living room, just hanging out. 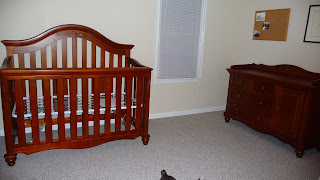 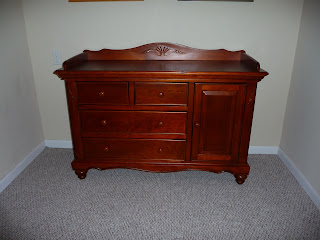 Since our options are somewhat limited up here (Target or Wal-mart) we decided to look at JCPenny online. We have a Penny's here, so we could ship to the store and return easily if need be. We got this set on sale from Penny's, and let me tell you: best decision ever. Penny's customer service is awesome! We had the crib and the conversion rails sent to the store so we didn't have to pay for shipping. They called us to let us know it had arrived, so we went Saturday morning to pick it all up. When we got there, the little old lady at the register had Travis help her get the box out of the back, but when he brought it out the box was bigger than me! There was just no way we were getting it in or on top of Trav's Dodge Neon or my Kia. The lady at Penny's even offered for us to use her car! We ended up going back the next day with Trav's mom's SUV, and he strapped it to the top. Travis put it together that evening, and after only a few bumps, it was all set up!

The dresser was being shipped on a truck to our house. I called a few times to check on it's ETA, and got really excited when they said it was at our local UPS. It took another week to get here, which started to make me anxious. Come to find out, they had to coordinate with a moving company to deliver it. The moving company called us to confirm delivery, and delivered it fully assembled. They even brought it up to the nursery and squeezed it through our narrow hallway!

So long story short: I would repeat this entire process again in a heartbeat. Couldn't be happier.

Here's a progress picture for you too! 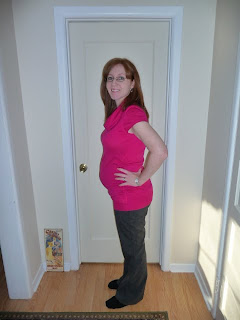 17 weeks and there is no hiding that I'm pregnant! I still just feel fat at this point. I'm ready to start feeling baby move!
Posted by Ali at 12:44 PM No comments: