So, the Super Bowl just happened, for those of you not in the know. I consider myself to be a bit of a football fan (i.e.: I play fantasy football every year, and no I don't let my husband pick my team or move my players around every week), so normally I'm kind of excited for the big game.

This year was just kind of "eh". I'm not a huge Seahawks or Patriots fan, and ever since Percy Harvin left the Vikings I feel like I really have no team to root for. If the Packers had made it all the way, that would have been nice. It is what it is.

I decided to host a little get together anyway, and just focus on making good food. Easy enough. We did the usual office board as well, so that at least gave us a reason to watch the game. 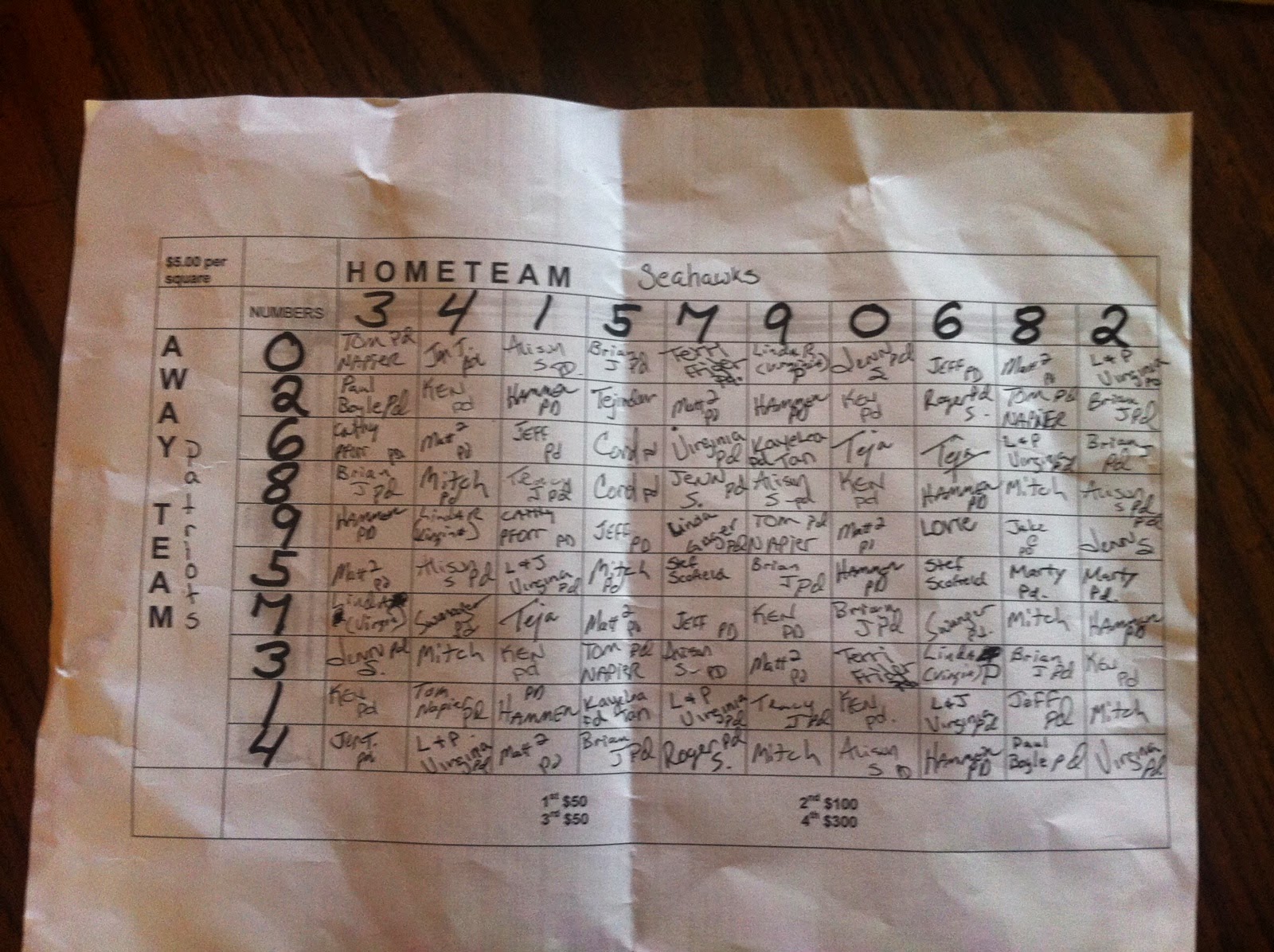 I don't care who wins, so long as I make a little money! Each square was $5, which is kind of high-roller if you ask me. Normally we do $2 squares and I run the board. This year another guy opted to do it. Saved me the headache!

If you're not sure how this works, basically you're looking for the winning score at the end of each quarter. So if the score would have been Seahawks 7-Patriots 3 at the end of the 1st or 3rd quarter, I would have won $50. The payouts for the half and final score were $100 and $300, respectively. Sadly, I didn't win a dime this year. There's $30 in the toilet! I'm not a very lucky person, so I should know better than to gamble. It never pays!

Anyway, we invited my in-laws over, as well as my sister-in-law and her boyfriend. We had chips, booze, and these amazing dishes from the Reluctant Entertainer. If you've not heard of this blog, seriously check it out. She posts some really great recipes!


On the left is Balela Salad, a Mediterranean salad with black beans, chickpeas, grape tomatoes, sun-dried tomatoes, onion, and just a hint of jalapenos. It can be served by itself as a side salad or main dish if you're vegan, or as an appetizer with chips. We served it as a side with chips to the dish on the right: Pulled Pork with Black Bean Cornbread Topping.

Uhm. OMG, y'all. This brings out my little southern heart like no other! Roasted in the oven for 2 hours, the meat was so tender and juicy. Some of the BBQ sauce had caramelized a bit on the edges, and the cornbread topping provided the perfect balance of sweet to the BBQ tang of the pork. It makes a lot, but I will definitely halve it down and make it again for the 3 of us. So yum!

We also had some really tasty chocolate chip/peanut butter cookie bars that my mother-in-law made. I actually had two. Whoops! They were crunchy and creamy and just full of peanut butter goodness.

So that was how we "celebrated" the Super Bowl. Good food, good friends, good times!

Did you go to a Super Bowl Party? Who were you rooting for?