Every once in awhile, we like to break the routine a little. Break up the winter doledrums, and do something fun. Treat ourselves. 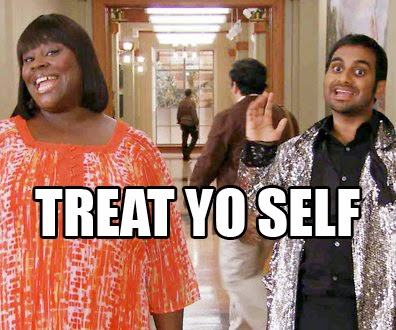 Sometimes, that can be a little difficult in our small town of 16,000 people. Also, with a 3 year old. Lucky for us, Emily still thinks going to the movies is the best thing ever. EVER.

She loves sitting in the huge chairs that her body weight can barely hold down. She loves the popcorn. OMGTHEPOPCORN. She loves that she gets her own little drink. Basically, going to the movies is best thing since sliced bread.

Normally we get one large popcorn to split between the 3 of us, but this time I splurged and got her a kiddie sized popcorn. Major brownie points for mama, holla! We save money by bringing bottled water in the diaper bag.

No, we don't use diapers anymore. Yes, we still use the diaper bag. Do you know how much you can smuggle into the theater in that thing? Probably all our own popcorn too, but there's just something about movie theater popcorn.

I also lied and said that Emily was 2, so she got in free. What? Don't hate. The 16 year old kids working the counter have no clue what's up, and I'm not paying $8 for her to see a movie. Although I have a feeling I won't be able to do this much longer.

Having been a Paddington Bear fan as a kid, I was actually kind of excited about seeing this. If not just for the nostalgia.

The basic premise is that after his Peruvian jungle home is destroyed by an earthquake, Paddington goes to London to find the explorer that once visited his Aunt & Uncle many years ago. He meets the Brown family, who grudgingly take him in until he can find the Explorer, and hilarity ensues with having a talking bear in a modern home.

For the most part, the movie was cute and had some funny bits. Trav and I both agreed that it could have done without Nicole Kidman as the villian who tries to capture Paddington so she can stuff him and put him on display in a museum. That was a little mature. I mean, I can see if she wanted to put him in a zoo, or take him on a traveling road show/carnival-esque type deal. But, really...kill him? Stuff him? A bit much.

There were also scary parts dealing with that aspect that Emily didn't like. She kept saying she had to go to the bathroom (no she didn't, we just went), and then hid her face in Trav's chest until it was over.

We all agreed that we just wanted to see more funny bear-living-in-a-house type things.

Given that it was a Wednesday night, and everyone is still in a tizzy over American Sniper, and we live in a small town, we were the only ones in the theater. Which is kind of cool. We could talk or make comments whenever we wanted to. Although, maybe that's not a great habit to be teaching Emily, now that I think about it.

So, even though I wouldn't rate this a 5 star movie, it was a solid 3.5 in my book. But the best part was that we all got to go together and spend time as a family.

Have you seen any good movies lately?