Saturday was Trav's 31st birthday. Amazing! I still remember celebrating his 21st birthday at the Chili's in Gainesville...oh to be young again!

I decided to surprise him with a weekend in the Twin Cities, including a Twins baseball game and dinner out at a nice restaurant. Thanks to my great in-laws, Emily got to stay with them so it was an adult-only weekend.

We managed to get down to Minneapolis in record time, getting to our hotel at 12:15. We had planned on leaving our car there and taking an Uber car to the game. Have you used Uber before? It is pretty slick - I am a fan!

Everything went seamlessly with Uber, and the driver dropped us off right by the front gate. Unfortunately, Travis realized that he left our car keys in the Uber car just as we were about to walk into Target Field. Thankfully I was able to get the driver's cell phone number through the Uber app in about one minute (seriously, they have a great response time), and the guy came back with our keys. Hooray! That was our only bump along the way. Everything else was great!

Get ready for a picture overload!

We had pretty decent seats - not quite nosebleed, but not box seats either. Of course we had to grab some food before we got to our seats. I had a pork belly bacon sandwich with jalapeno jelly and vinegar slaw. Uhm, OMG was this good! Travis had a really great Cuban sandwich. I think I would get the Cuban if we ever go back. 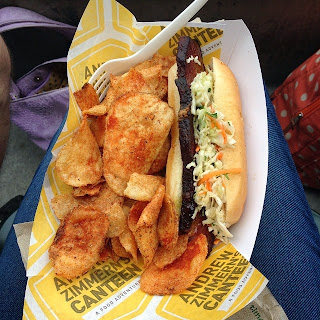 The game was pretty exciting with lots of hits and plays. In the end, Twins won 6-4! 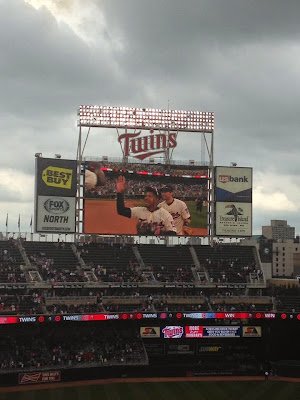 We decided to walk to the restaurant we were going to for dinner since the clouds cleared out, and we had tons of time. We walked across the Mississippi River into an area of the city known as "dinkytown". Ha! It's close to the U of MN, so lots of students, bars, and funky restaurants. 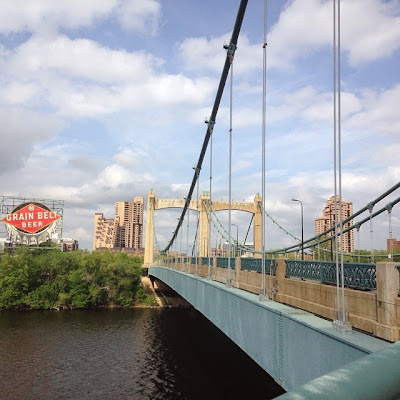 We ate at a place that came highly recommended by a cousin, called the Red Stag Supper Club. Even though we were an hour early for our reservation, they let us sit anyway. So we ordered some appetizers and some adult beverages. We had a delicious cheese plate, and their signature Truffled Kettle Corn. Kettle corn drizzled in truffle oil - hello yum. No pic of that because it just looks like regular popcorn.

Their menu is small, but pretty diverse. I had a really hard time deciding! Travis got the hanger steak, while I opted for the green garlic risotto with a side of grilled baby carrots. The risotto was delicious, but those carrots were to die for! Both Trav and I agreed that they were the best thing we ate there. Weird but true. 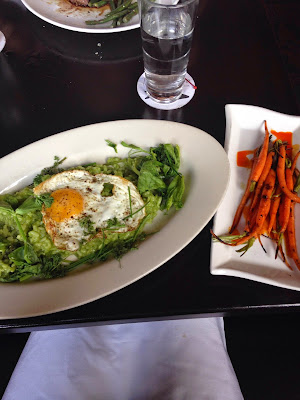 Afterwards, we stopped at a little gallery that was having a small show. One of the artists was there, and we started talking after I read his bio. I was amazed to find out that he's actually colorblind! He explained it as being able to see most colors, just not as many variations as you or I. Because of this, he works with one color at a time, so his colors are very crisp and clean. We couldn't afford any of his pieces, but I did buy some cards. This was one of our favorites.


We stopped at a bar that was supposed to have a great cupcake menu, but that was a flop. So we hightailed it out of there and went to a little place called Aster Cafe. They were having an open mic night with four different singer-songwriters. They had a great patio, and since we had some time before the show, we ordered a drink on the patio first. This Sweet Bitch Sangria was supposed to make the world a kinder place. I'm not so sure about that, but the drink was good! 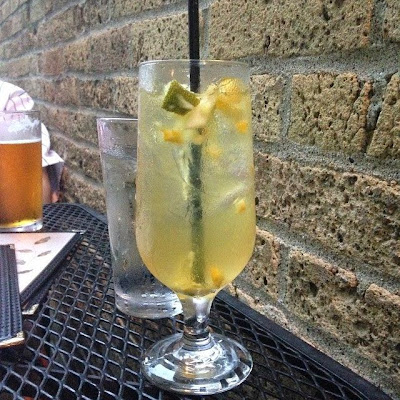 It started raining just before the show started, so we moved inside and nabbed a table. The music was pretty good, or half of it anyway. We both agreed that two of the songwriters were good, while two of them needed some work.


We decided to head back to the hotel, and got another Uber car. Luckily, no keys were lost in the process! Our hotel had a fun bar, so we had a night cap there as well.


Our hotel did not include a free breakfast, so we decided to check out a place nearby called Good Earth - lots of organic and locally grown ingredients on the menu. Travis got a plate called "Joe's Eggs", while I had the stir fry omelette. I liked his better, although my sweet potato hash was delicious. Some of the veggies in my omelette were a bit too watery, making it kind of soggy. Also, the cheese ended up all on one side in a big, globby mess. 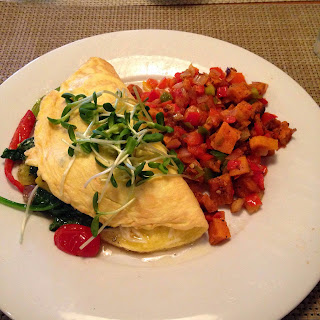 We ended the trip with a quick stop to the Saint Croix Vineyards, and then made our way home. Even though we were both exhausted, we invited Trav's parents over for dinner and cake for his birthday. They brought Emily back to us, so this worked out perfectly. We had a quick dinner of burgers and salad, cut the cake, and then called it a night! I was in bed, asleep, by 8:05, and I don't think I moved all night long. Talk about exhausted! But it was a really great birthday weekend. Now we'll be eating Ramen noodles for the rest of the month to make up for it. Ha! Hey, you only live once, right?

How was your weekend? Have you ever used Uber?
Posted by Ali at 6:56 AM