Hello! Isn't it nice when your week starts on Tuesday? That pesky Monday is already done and over with, and Friday is that much closer!

We had a pretty laid back Memorial Day weekend. No parties or picnics for us this year. It rained all day on Monday anyway, so that would have put a damper on a BBQ anyway!

Friday night & Saturday we did have some pretty beautiful weather though. We were able to have our first bonfire of the summer on Friday night, thanks to all the rain we had previously. We were on a burn restriction for awhile, but a week's worth of rain will change that in a hurry! 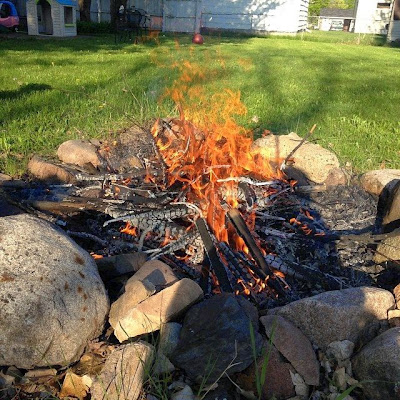 Emily enjoyed a s'more (or two), and roasted her own marshmallows. That made mama a little anxious, but she did a good job with only a little help from me. 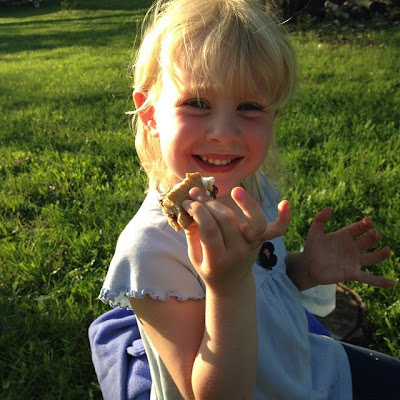 Saturday we spent almost the entire day outside. I got some flowers to plant in our planters on the front porch - white columbine and pink inpatients. I always misjudge how many flowers I will need, and buy too many. So then I had enough inpatients to do a hanging planter, and two small pots for the back yard. I also bought some fresh basil, since our grocery store never seems to have any.

Travis built a raised bed, and planted green onions and carrots there. He also put in some sugar snap peas and pumpkins in our old garden. He has plans to put some asparagus too, but I've heard that those take a few years for a good crop. But they they come back for something like 20-30 years. Crazy! The next owners of our house will thank us.

We also found a robin's nest in one of our trees, with a pretty little egg in it! So there had been a lot of excitement about that. "Where's the mama bird?" Or if she's at the nest, "where's the daddy bird?" I hope we are able to see the baby bird when it's born, and that we don't freak the mom out too much. We're trying to steer clear as much as possible. 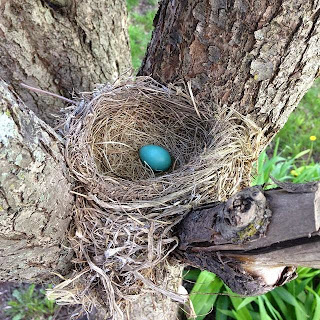 Sunday morning I was up bright and early to meet a couple of guys from our running group. We ran a new-to-us section of the Mesabi Trail. I only planned on 13 miles, while they did 14. Since it was an out and back route, I ran the 2nd half by myself. Those miles felt a lot longer than the 1st half! I did stop to snap this pic of the cool bridge over the highway. 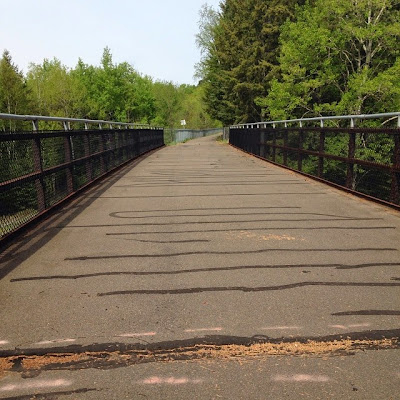 That evening, we made "beer can burgers". Or basically, a burger patty made into a cup using the form of a can or jar, then wrapped in bacon, filled with cheese, sauteed veggies, and topped with cheese again. We filled ours with green pepper, mushroom, and onion. Very good, but next time I wouldn't saute the veggies, I'd just let them cook in the burger.

Monday was rainy and gross, pretty much all day. We had a lazy day filled with movies and crafts. I had to run to Walmart, and I knew we were all going bonkers out of boredom, so I picked up some construction paper, pipe cleaner, glue, etc.

We wrapped up our weekend with Sons of Anarchy and some popcorn. We just started watching SoA on Netflix. Someone tell me, does the acting get better as the seasons progress? Right now, we both laugh a little at the characters and the way they over-sell their lines.

How was your weekend? Filled with Memorial Day Activities or laid back like ours?