If you like Cuban sandwiches, you have got to try this recipe. If you've never had a Cuban sandwich, I still highly recommend this Skinnytaste recipe, from her newest cookbook. We've made it twice now, and it's come out fabulously each time.

Directions:
Preheat the oven to 425 degrees. Prep a baking dish or pan with aluminum foil. Cut 5-6 pieces of kitchen string, about 8 inches long. Mix your spices together to create the rub in a small bowl.

Next, spread your mustard on one side of the tenderloin. Add the Swiss cheese on top of the mustard, then the deli ham on top of that. Last, add your pickles. Since Travis hates pickles, I put banana peppers on his half. Then you'll want to roll your loin up like a jelly roll, basically. Tie it closed with your cut kitchen strings. I find it easiest if I lay the strings out on my pan, then lay the loin over top and tie them off.

Rub the loin first with olive oil, then with the mixed spice rub. Pop that baby in the oven for about 35-45 minutes, depending on thickness. Mine typically takes the 45 minutes to fully cook to 160 degrees. Let it rest 10 minutes, slice and serve! 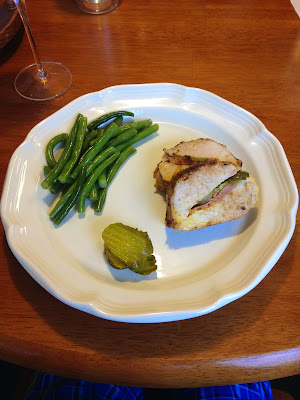 You see with mine that I only cut it in half. I probably could have done 4 quarters, but it works well this way too. Paired with a fresh veggie, this makes a great, low-calorie meal that still packs a lot of flavor. The three year old clears her plate and asks for more!

Do you like Cuban food? Have you bought the Skinnytaste cookbook yet?