Did you know there's only 7 Fridays left until Christmas? That means 7 more paychecks for my family, so I better get Christmas shopping!

We've been in a bit of a candy-induced food coma this weekend, thanks to Halloween. I tend to buy way too much candy to hand out, and did not fail at that again this year. We had 2 groups of Trick or Treaters, or about 8 kids. I was giving them handfuls, but we still have a ton left.

Emily also rocked Trick or Treating. Despite it being about 34 degrees while we were out, she still lasted for over an hour. Travis had to carry her for the last 20 minutes or so, but she went up to each door and said either "Trick or Treat" or "Happy Halloween!" to each house. I had to laugh when she would say "Happy Halloween" instead of "Trick or Treat", because I kept reminder her that the candy comes when you say "Trick or Treat". She's just a polite, well-wishing kid, I guess.

Emily dressed up as Elsa from Frozen, along with a million other little girls. Actually, we only saw about 5 other Elsa's, but I'm sure if we went to the town's indoor party then we would have seen many more.

Because it was so cold, I dressed her in a t-shirt, turtle neck shirt, tights, leggings, extra pair of socks, plus she wore her winter jacket and hat over her dress. She was feeling pretty good until about 40 minutes in when she started getting cold. Also, those cute little Elsa shoes only lasted for one house before she wanted to switch into her tennis shoes. Good thing Mom is a planner and brought them along! Overall, she did great and filled her entire bucket. I'm proud of my little Elsa!

On Saturday, Travis spent the day putting up our outdoor Christmas lights. I really dislike the whole Christmas-steam-rolling-Thanksgiving trend, but this is kind of a necessity in our neck of the woods. Please refer to this post from a few years ago.

One strand of lights on the very top of our house had been up there for two years at this point, and were pretty sun-bleached. I am actually thankful that Wal-mart had their lights out already so that I could buy new strands this year. Maybe we should just switch to white lights so this doesn't happen again? Should we be those neighbors who perpetually leave Christmas lights on their house? As it stands with our snow and ice situation, they usually can't come down until March, at the earliest, anyway.

We wrapped up our weekend by attempting to make Garbanzo Bean Burgers for dinner last night. I am on a healthy/weird food kick lately and these sounded really interesting. They are supposed to look like this: 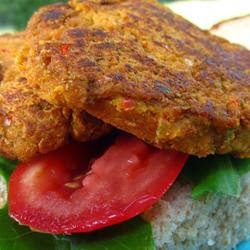 Placed on a bun, with some mozzarella cheese, lettuce, tomato, and maybe some Greek yogurt. Looks good right? There's also red pepper, carrot, and some green chile in there.

Unfortunately, this recipe lied. They were mush and just wouldn't hold it together even after spending 30 minutes in the oven. We eventually turned the broiler on, just so they'd harden enough on the outside so that I could get them off the pan with a spatula. The flavor was ok, even good, but they definitely need a binder. If we make them again, I'll add breadcrumbs and an egg. But, I may just stick to our trusty black bean burgers instead.

How was your weekend? Gearing up for Christmas, or looking forward to Thanksgiving first?