Brownies with Brown Sugar Icing and Pecans...and other musings

I am having a love affair with pecans. I'm not sure what it is about pecans right now, but I am craving them like no other - and no, I am not pregnant. I think it's just the time of year where all you want is baked goods and comfort foods because the holidays are upon us and the cold weather has set in. Gotta get hibernation ready!

I'm even attempting a pecan pie for Thanksgiving. What!?! This girl, who could barely get around a kitchen just a few short months ago, is making a pecan pie? Actually, it looks really easy so I'm going to give it a whirl.

Anything with pecans right now is totally my jam. From the cream cheese cookies I made last week, to just a handful of pecans and cranberries topping my salad, I'm all about that nut, bout that nut, no trouble! (See what I did there?)

Maybe my inner self is yearning for my Southern roots. Pecan trees are all over the South, and pecan pie is basically the Southern dessert.

Maybe it's because they're sort of forbidden fruit (err, food) since I just got braces put on.

Yep, you read that right. I am now the proud new owner of dental hardware. Something I should have done long ago, but kept putting off and putting off until I finally decided. It is time. So, Thursday afternoon I went in to the orthodontist after a few consultation appointments, and 45 minutes later I came out with braces on my upper teeth. They'll put the bottoms on in a few months after the tops have moved enough. Something to do with biting down on the bottom brackets, and that sounds like no fun.

I have a new list of "forbidden" foods which include:
- popcorn
- nuts
- caramel
- hard candy
- hard fruits and veggies (unless cooked or cut up)
- Butterfingers
- taffy
- sugary sweets of all kinds

just to name a few. I'll let you in on a little secret though - I'm already breaking all the rules. I've eaten popcorn, nuts (pecans, obviously), and sweets like ice cream and these amazing brownies that I made this weekend.

I've learned that I will just have to brush my teeth after every meal, which is a pain but it saves me from the embarrassment of having food in my mouth. It's been an adjustment, to say the least. The bright side of this post are these brownies: 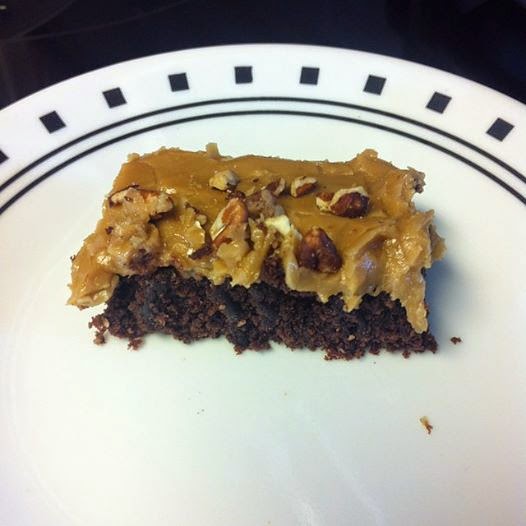 1. Preheat the oven to 350 degrees. Grease a 9x13 pan. Make the brownies according to the directions on the box, fill pan with brownie mixture, and bake according to directions. Let cool before you ice them.
2. For the icing, mix brown sugar, butter, and cream in a small sauce pan. Bring to a boil, stirring frequently so it doesn't burn on the bottom. Remove from heat.
3. In a large bowl, add confectioner's sugar and vanilla. Pour brown sugar mixture over confectioners sugar mixture and beat on low with a hand mixer until smooth. Refrigerate for 5 minutes to set.
4. Once brownies are cool , spread icing on top of brownies in the pan. Sprinkle desired amount of pecans on top. Cut and enjoy!

I adapted the recipe from this Pumpkin Brownie recipe, which looks amazing. I didn't want pumpkin brownies because I'm kind of pumpkin-ed out (gasp!), and I was feeling lazy so didn't candy the pecans. The icing recipe is all her though. She also used an 8x8 pan, and cut hers into 9 brownies, so you could use a smaller pan and have thicker brownies. My box called for a 9x13 pan, but I cut mine into 1 inch(ish) squares. Trust me, these are so sweet and decadent that you won't need a huge piece. Which makes them last longer!

Have you had braces? Any words of advice? What are you craving with Thanksgiving right around the corner?
Posted by Ali at 5:00 AM