Hello! This weekend was chock full of exciting things for my little family.

Saturday morning I woke up early to get our grocery shopping done at 7:30am. I love shopping early! There's no one in the store, I can take my time, and I bring my coffee with since the carts have cup holders. Best thing ever.

I had good reason to go that early though. I was driving out to a group run that started at 10am, and I wanted to hit up a holiday bazaar at a local school before I went. I managed to buy a few cookie trays at the bazaar, plus a new pair of mittens and I ordered a hat to be made. Hopefully to match the new jacket I have on my Christmas list.

Our group run was great. 14 people showed up! The majority ran 10 miles, but since I'm still nursing my dumb foot injury, I ran 6 with one of the slower members of our group. Then I had to race home to change because we were off to Duluth!

Our plan was to see Santa, go out for dinner, and then tour the lights at Bentleyville. It's becoming our annual Christmas tradition. 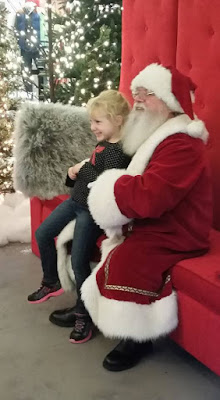 Emily told Santa that she wants Rudolph for Christmas. Hopefully she means a stuffed one - I don't think Santa can do without his star reindeer! 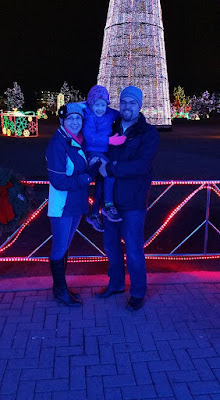 We invited my in-laws to come since they've never been to Bentleyville before. We had a great evening! Everything took longer than normal because of crowds and holiday shoppers, but it was still a great night. Great weather too!

We didn't get home until pretty late Saturday night, so we ended up going to the later service at our new church. I thought there would be more people, and especially more young people. I was surprised to see that not only was there less people at this service than the early one, but almost no families! Emily likes to keep occupied by drawing or coloring during the service. They have little sheets of paper in the pews for kids to draw on - I think I'm going to have to buy the church a ream of paper. Or two. 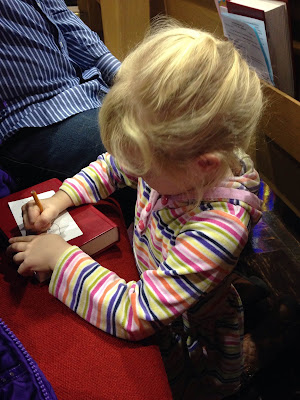 Our weather has been unseasonably warm - high 30's during the day, 20's at night. Yes, that's warm for us. Also, we've had barely any snow! I kind of love it, because it's better for running, but I know the rest of my Northland friends are unhappy. No ice fishing or snowmobiling like normal. I will say that I hope we have a little more snow by Christmas. That just makes it festive.

I shot this pic while out on my run this morning. You can see how clear the streets are, but we did have a little frost this morning! 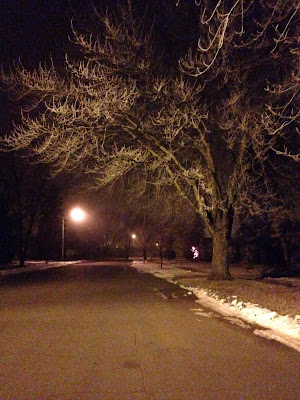 You can see grass on the side of the road. Dead grass, but still - that would normally be covered in snow by now!

How was your weekend? Are you having warm weather?
Posted by Ali at 6:15 AM