Good Monday morning! For my east coast readers, I hope everyone is staying warm and safe with the impending snowmageddon that is heading your way. Essentials to have: milk, toilet paper, wine, and brownies.

This weekend was a fun one here in the Great White North! We are actually having some warm weather for a change, and little snow. I am totally ok with that.  It's maybe a little early for spring, but I'll take warmer temps at the very least.

*I'd like to pause here for a short grammar lesson. Did you know that the seasons do not need to be capitalized? Spring, summer, fall, & winter? I am embarrassed to admit that I just learned this a few weeks ago. I could have sworn to you that I learned the opposite, but it's true! So I thought I'd share that tidbit for anyone else out there that was making the same mistake.*

Saturday was officially bachelorette day for my friend Carol, who is getting married in 2 short weeks. It was also the last of my official duties as a bridesmaid before actually standing up in the wedding.

Carol is a year older than me, and not exactly the bar-hopping type. Instead of the traditional bar crawl with feather boas and male-anatomy paraphernalia that you typically see at a bachelorette party, I suggested that we go to a swanky jazz bar for dinner and drinks. She liked the idea, so that is precisely what we did.

First we stopped for pedicures. One of the bridesmaids had never had one, so it was funny to see her squirm a bit - apparently she is very ticklish! What a good sport. Then off we went to the Black Water Lounge. They are known as one of the best martini bars in the city of Duluth. They also have a pretty upscale "bar" menu, including sushi, flatbreads, and fondue. We spent a good 3 hours enjoying some adult beverages and way too much food. Since I planned on making the drive home (1.5 hrs), I played it pretty cool with the alcohol, opting for wine over martinis.

I'd like to think that we all had a really great time! Our pregnant friend rode with me, and needed to call the night short by 10pm. I was totally fine with that since that's way past my bed time anyway - especially by the time we got home. Apparently the bride-to-be and the rest of the group moved on to another bar after that. I hear they got home very late!

Sunday was spent just relaxing and getting some things done at home. I think I'm going through sugar withdrawals after the holidays, because I've been craving some baked goods again. I decided to whip these up since they are slightly more healthy than your average brownie. 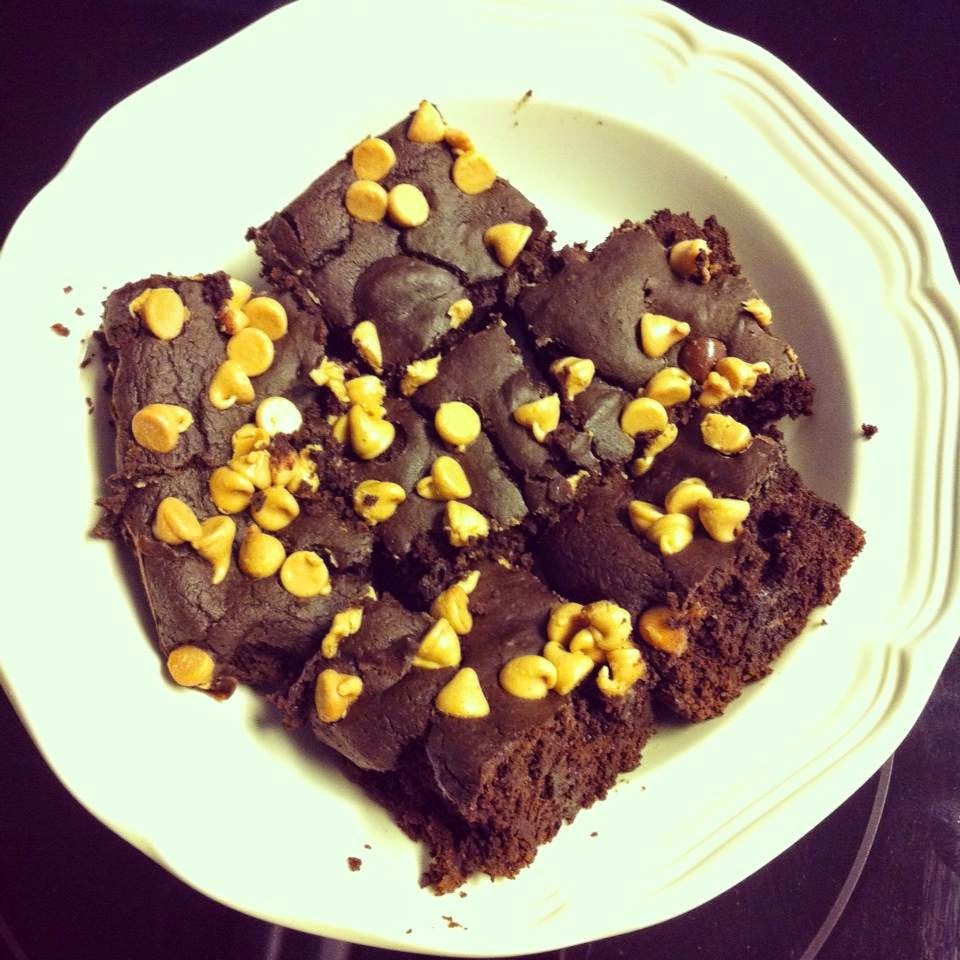 Besides cocoa, sugar, and eggs, they also have a couple of secret ingredients: black beans, ground coffee, and balsamic vinegar. Sounds kind of gross, right?

I promise you that they are not! They are sooooo good - even Emily and Travis ate one and requested more. The black beans (ground up well in a food processor), help with the consistency, while the ground coffee helps to bring out the chocolate flavor. I guess the balsamic vinegar acts as a leavening agent since there is no flour. Those flavors bake right out, and all you're left with is ooey-gooey chocolate flavored brownies. I also added peanut butter chips on top instead of the chocolate chips that are called for. Because I love me some peanut butter and chocolate.

At 144 calories a pop, they're probably no better than a regular box brownie, but these are gluten free and pack a punch of protein. So...they're healthy?

Would you try my brownies knowing what they're made of? Have you been to a bachelor or bachelorette party lately?