Weekend recap: I ran with a running group!

I was just starting to get really jealous of all these people out in the world that get to run with running groups. That sounds fun and a good change up from running solo, and I was seriously missing out!

Lo and behold, I found a fledgling runner's group just a few weeks ago that is really starting to get active. Hurray!

The unofficial leader has been posting his runs as events on our Facebook page for all to come and join. This weekend was a 10 mile run called Steady Pace - "1 mile easy, 8 miles steady pace (5K + 50-80 sec), 1 mile easy". I was supposed to run 10.5 miles for my half-marathon training, so this was perfect!

Our route was an out and back that I've run many times before. There are 3 killer hills and one kind of annoying hill. Not steep, but super long.

While we were running as a "group", it was really at your own pace. I was the last in the pack because the other 2 girls that came turned around early. So, just me and the boys! After we turned around, right around the 6 mile mark, I ran into another runner going in the opposite direction. Imagine my surprise when it was Hardrocker Joe!

Joe turned around and ran with me a little, but he was running faster as well. However, he was still in sight when I had to get up those stupid hills. He told me a long time ago to take smaller steps going up hills, which conserves energy and gets you up them in the same amount of time. It was really great motivation having him right in front of me. I was thinking "just follow Joe, get up these hills. If he can do it, so can you". Of course, I made it!

The idea was a steady pace for those 8 miles. While I was running, I didn't feel like I was going at a steady pace, but I was really trying to concentrate on this. I was focusing on running a 9 min mile average pace, but my Garmin was all over the place. 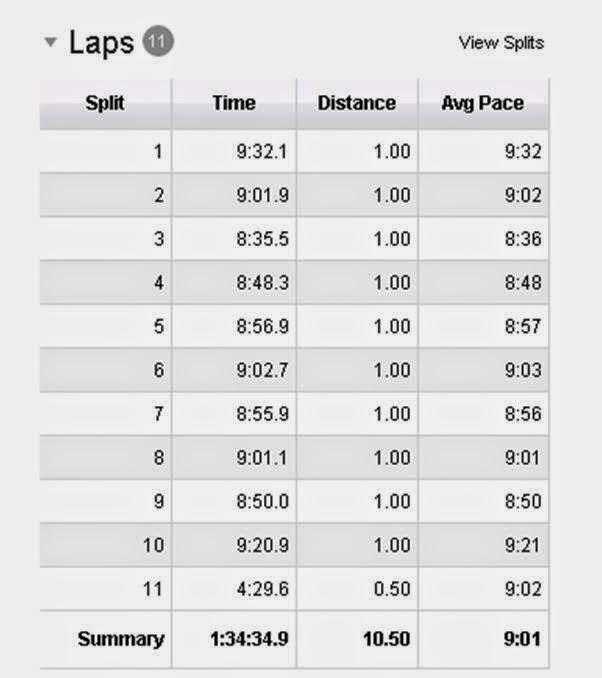 Imagine my surprise when I was pretty bang on! I even squeezed in that extra half mile for my training. Overall, this run was really good! I really hope that I can get a few more of these group runs in before the weather turns cold and miserable. Can you believe it's September already?