This weekend I had another race down in Duluth. I know some of my readers (hi mom!) are thinking another race???

Well, this one seemed really cool! The Minnesota Power Tunnel 10K, where we got to race on I-35. Yes, actually right on the interstate. Through the tunnels. How neat is that? I believe that it is usually illegal to even be walking on the interstate, so this race had some unique appeal.

Of course I had to leave my house before the sun was up to get down there and checked in on time. What else is new? Luckily my friend, Colleen, was up for the challenge. You should remember her name, she also ran Ragnar with me. Colleen convinced her friend, Angie, to run as well. So the three of us set off for Duluth at 5:45am.

We got down there with plenty of time to pick up our race packets, use the bathroom, and get a feel for the lay out. The finish line was right by the William A. Irvin ship, with the post-race goodies and what not in the DECC.

The starting line was on I-35 by the old train depot. I had my phone with me, but failed to even think about taking any photos. Here's a shot of the start from last year's race.


We did manage to get another runner to snap a photo of the 3 of us. Not the best pic, but proof we were there. It was also about 35 degrees at the start, so don't laugh at all the clothing I'm wearing.

The race is chip timed, but they do a gun start. I believe they don't have the chip mat at the beginning because of logistics and lack of power on the interstate. So I made sure to be nice and close to the starting line, faster runners be damned. (I mean that in the nicest possible way!)

The race course is nice and open, since it's on the highway. You run through 4 tunnels, I think. I wasn't really counting. Warning! Your GPS signal will drop in every tunnel. Mine came back, but I know Colleen's did not. That can lead to some weird pace times. At one point, my watch said I was running about a 3:45 mile. Very cool, but never gonna happen!

Even though the website shows a hilly elevation map, the course is really not hilly at all.

This is an out and back course, and towards the turn around there is kind of a long hill. But then you get to fly down it!

I believe that's London Rd right by Black Woods Grill. They give out water bottles instead of cups, which is nice for several reasons:

1) You don't spill it all over yourself - especially concerning in the cold weather.
2) You can put the lid back on and carry it with you.

There is one more "hill" towards the end when you come up off the interstate via the off ramp and turn towards the DECC. But really, it's very manageable. I like to play mind games with other runners during races (am I the only person that does this?). There was a gentleman coming up behind me right before we started up the ramp. I was determined to run up strong and not let him pass me. Not only did he not pass me, I never saw him after that!

My goal for this race was to stay at a steady 8:30 pace. I think I did a good job at relaxing into that, despite my Garmin watch going in and out with the tunnels. 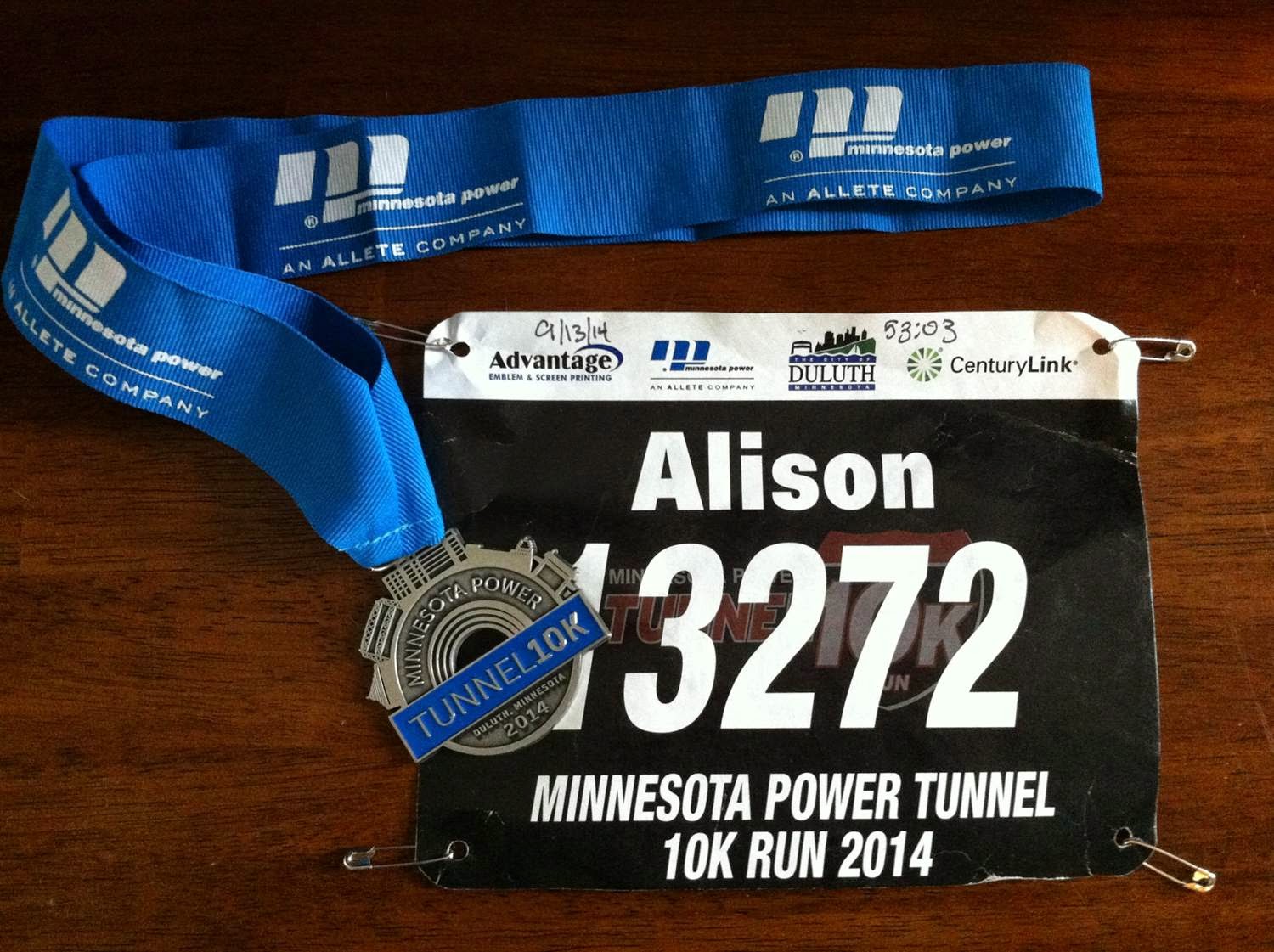 Overall, I really enjoyed this race. They were pretty slow to get results up online, but given that this is only the 2nd year of the race I will cut them some slack. The 10K crowd was nice and small at 500ish people, but there is also a half marathon and some in-line skating races that go on as well. So it felt just big enough not to be overwhelming. The volunteers and race coordinators were great too, super helpful and friendly. I think this is one to add to the yearly race book!

Did you run a race this weekend? Do you play mental games with other runners?