The Half that Wasn't

This past weekend my husband, daughter, and I traveled 2.5 hours away so that I could run a half marathon. I'd done all my training, felt like I'd properly tapered and carb loaded during the week. I was feeling ready!

But then, there was rain. The whole state is getting a record amount of rain. But I thought "Alison, suck it up and just do it."

But then, it's a trail race. In my head, I knew this. I  knew it signing up. But I never really thought about how different a trail race would be. I talked to my trail-running co-worker, and he just said I'd be a bit slower than normal. Ok, I can deal with that. Already though, I was coming into this race in a bad mental place. It started to look completely different than how I was envisioning, and that was ticking me off.

At packet pick-up the night before, one of the race volunteers talked to me about the footing. He said "most of it is like sugar sand, so it shouldn't be muddy!" Sand? Seriously? I do not live in Florida anymore; I do not run on beaches. Ok, now I'm praying for some rain to harden the pack. Another volunteer also told me about the first hill being a "doozy", but then it was nice and rolling the rest of the way.

The morning of the race we awoke to rain. Of course. But that was ok! As long as it stopped by race time, which it did. This was such a grass-roots type event. It was chip timed, but the start line was just a spray painted line in the sand. The race director said that the starting signal would be a siren, and then the siren went off! We all started a little confused, but took off all the same.

Let me tell you what: I felt like I had been lied to. LIED TO! The footing was really terrible. It wasn't all sand, but there was a good quarter mile stretch of straight sand. Most of it was grass/dirt with the occasional tree trunk or rock to twist your ankle on. And that first hill? Straight down and straight back up again. It was so steep that there were 2x2 wood "steps" every five feet so you could get your footing going up the hill.

But I was trying to be positive. I thought "ok, we're done with that hill, just one more time and the rest is easy!" The course was two loops of the same trail, one loop being 6.55 miles or basically a 10K. However, that first hill was not the only one like it. There were so many dang hills! "Rolling hills", my butt! By about mile 4 I had decided that I'd had enough and I was dropping down to the 10K. There was no way that I was doing another loop. Plus, the weather was starting to turn again.

By the time that I turned the last corner towards the finish line, I was actually in a good mood! I thought "Hey, there's the finish line! We can stop in like 30 more seconds!" I saw my husband and daughter and yelled to them "I'm going to be done! Meet me at the finish!" And that's exactly what I did.

I ended up finishing in 59:06, which is slow for a 10K for me, but a decent time for a trail race. I actually came in 4th in my age division. Funny enough, the 1st and 2nd place finishers are two girls on my Ragnar Relay team that I haven't met yet. We only discovered after the fact that we were at the same race.

So, in the end I was pretty disappointed by the whole thing. But at least I tried it, and now I know that I don't want to do trail races ever again. I got my finishers token for the 10K, and can at least be proud that I did that much. Road races for life! 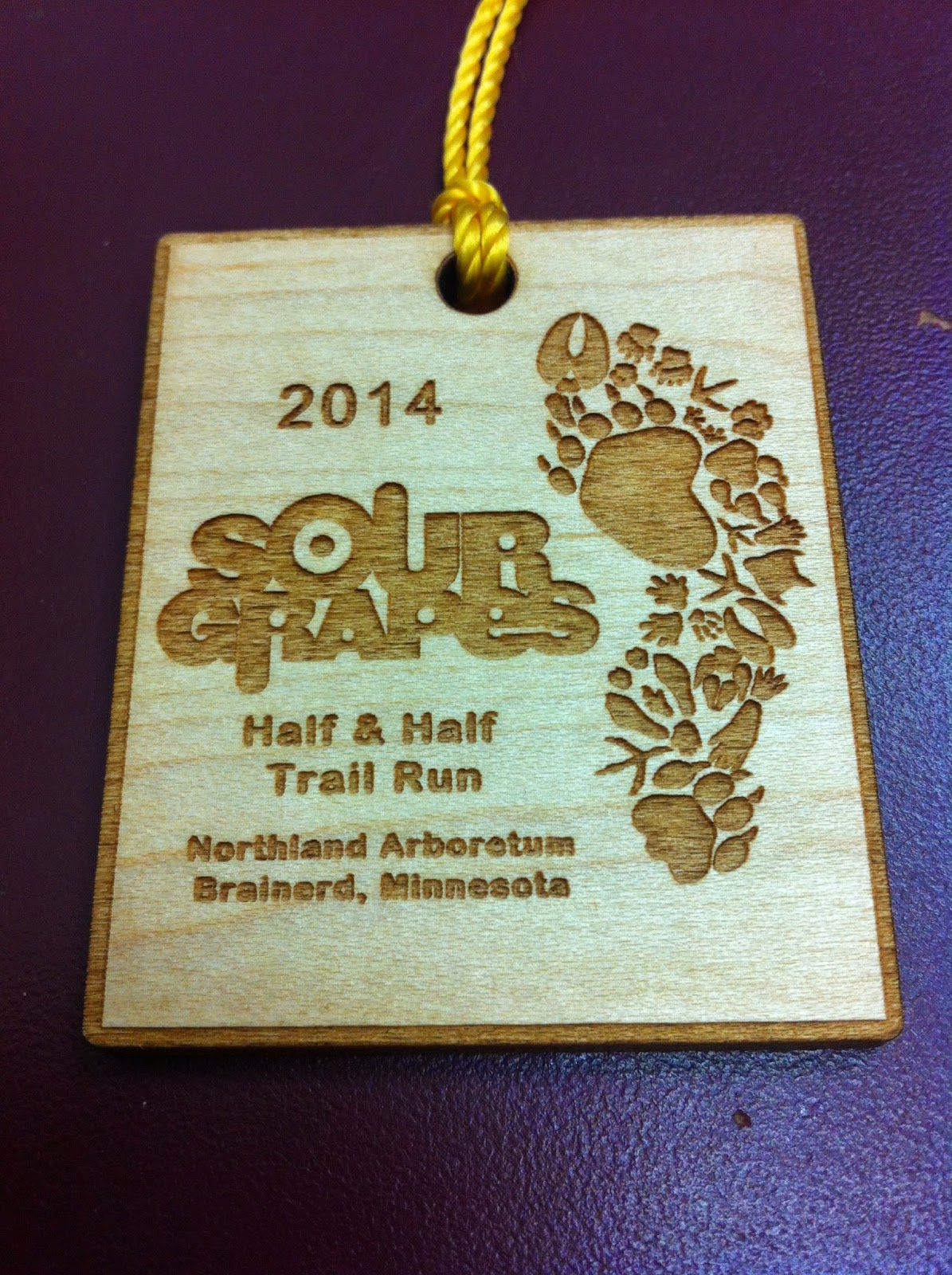 In an interesting turn of events, I managed to get a bib for one of the largest half marathons in the state, which is this weekend! I had previously decided to do the trail race over the large race because the logistics intimidated me. But being frustrated that I didn't get to do a half marathon after training for it was really a motivating driver. So, I'm bunking with a friend the night before, and dragging my butt to the bus pick-ups at 4:45am. Hopefully this race turns out a little better. Although I don't really have a choice - it's one long route where I have to get to the finish line to get home. So off I go!
Posted by Ali at 6:09 AM