Suck It Up, Buttercup 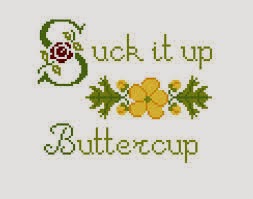 That's what I'm telling my body. In the nicest way I can, of course. "Hey body, suck it up!" You see, I went on this lovely, hard, grueling long run on Sunday. It may not have been the wisest idea to do 7 miles after running on the treadmill all winter. The treadmill works different muscle groups in your legs than running on pavement would work. So basically, all winter long, my hamstrings have been getting a bit lazy. They are the fat couch potato of my leg muscles.

My hamstrings kind of hate me this week.

But I was expecting this, wasn't I? Yes and no. Naive me was hoping all would be fine. In an effort not to do damage and let my legs rest a bit, I did not run Monday or Tuesday. By Tuesday night, I decided I've had enough of this and it's time to get back out there. Which I did, this morning. I ran 3 miles, and it was definitely work. My hamstrings weren't in pain, but they were saying "hey, what is this crap?! Can we go back to bed now?" But I have a game plan.

I try my best not to get injured while running. Injuries are common, and sometimes you can run through them and sometimes you need rest. Last Spring, I had some chronic hip pain that I ran through. Then it was tendinitis in late Summer that my doctor told me to run through as well. I read a post on Pinterest that said redheads have a higher pain tolerance, even though technically we have a gene mutation that allows for red hair. Hey, I'll buy that. I mean, everything on the internet is true, right?

Anyway, with my hamstrings, I'm not so sure. I've heard of people getting more severe injuries from doing exactly what I did. But I thought I was invincible and went running anyway. Now I have to allow for annoying pain. Now I have to plan shorter runs and slower runs. But that's ok, because at least I'm still running. So, my plan is to take another rest day, then get out there and do some hills. Hills make you stronger. Hills make your legs push. Hills also give you a nice tush. I'll buy that, too.

Have you had a sports injury? How did you work through it?
Posted by Ali at 7:48 AM