Those two things go together, right?

Let's be honest - anything goes with wine in my book.

This weekend, Travis and I headed down to Duluth for a little adult getaway. I won tickets to a UMD hockey game, so we decided to stay overnight since the game would likely let out late. Thanks to my sister-in-law for babysitting!

Little did I know that our stay would also coincide with the last night of "Eat Downtown Duluth". We made reservations at Bellisio's, an upscale Italian restaurant right down the street from our hotel. They have an extensive wine list. Like, one of those books they bring you with pages upon pages of different wines. You can also do a wine flight of 4 different varietals.

I chose to do a flight so I wouldn't have to decide on just one wine. 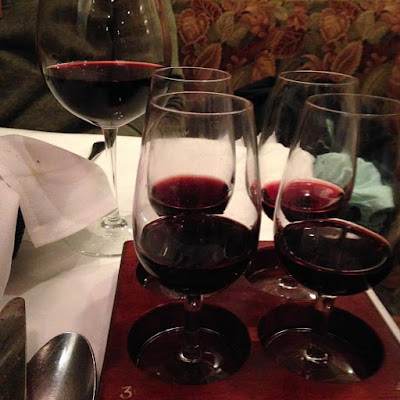 Their menu for Eat Downtown included a soup or salad, 3 different entrees to choose from, and tiramisu for dessert. I originally planned to just order an entree off the menu, and then Trav and I could share the dessert. But I ended up wanting chicken marsala, which was one of the 3 fixed entrees. So no sharing dessert!

After dinner, we were able to walk over to the Amsoil arena at the Duluth Convention Center, where the Bulldogs play. One of the things I love about staying in Canal Park when we're in Duluth, is that you can walk everywhere very conveniently.

The game was a good one. I don't know much about hockey, but it seemed like Denver's goalie was very good. While Denver only had about 12 shots at the goal, we had well over 35 and the game still ended in a tie.

Our seats were really good - row 2, right next to the visitor bench. However, the Denver's 2nd string goalie decided to stand for most of the game, so anytime there was action on the far end of the rink, we couldn't see anything! The couple sitting next to us were complaining about how annoying it was. We eventually goaded some high school boys sitting in front of us to poke the guy, and then pass a note to him saying "Sit down please!" It was hilarious!

I'm not sure if he ever actually read the note, but he did sit down with about 10 minutes left in the game. Success!

After the game, we retired to our hotel to enjoy some more wine and salmon pate. Northern Waters Smokehaus makes the best smoked fish and a salmon pate that is amazing. Whenever we are down there, we try to get some. It sells out quickly, but we've been lucky the past 2 visits!

I tried to sleep in on Sunday morning, but that old internal clock had me up at 7. Dislike! We still managed to have a lazy morning, followed by a little shopping at the mall before heading home. We spent an hour in Barnes & Nobles - I forgot how much I love to peruse a book store! It's much easier without a kid in tow. I also found a Christmas album by Pentatonix. Emily is obsessed with their song "White Winter Hymnal". It also includes a bonus track of "Let It Go". I am the best mom ever.


How was your weekend? Are you a hockey fan?