Early in October, I signed up for this Halloween fun run thinking that it would be a good idea to have something to look forward to after my marathon. Mostly so I didn't feel like it was THE MARATHON and then nothing.

This is the first time I've run a race on or around Halloween, so I decided to have a little fun with it! I picked up some striped "witch" tights and a little hat that seemed easy enough to run in. Emily was a black cat for Halloween, so we made a cute pair! 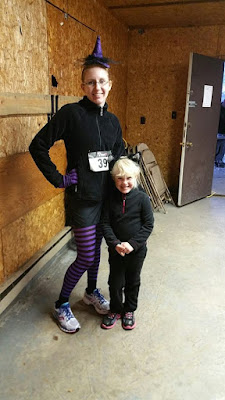 This was a very small race in a local park, and I believe it's the first year they've held it. Also, the weather was pretty crummy. 40ish degrees, misty, and windy. I think there was a total of 65ish runners, including a couple of kids that wanted to do the 5k. One was in a stroller though, so I'm not counting her!

Anyway, we started after the race director yelled "GO!", and off we went to run a figure 8 in the park. There's a pretty steep hill at the first curve of the 8, and I could feel that I was working too hard already so I backed off the pace a bit. My witch hat started falling off with the first little puff of wind, so I yanked it off and held it for the rest of the race. I started picking off some runners, and then we cruised down a hill and out of the park to the flat roads for the last 2 miles on an out and back course.

Around a mile and a half, I fell behind 3 other women in my age group. They were going a bit slower than I wanted, so I hopped off the sidewalk and passed them quickly. Then I started feeling like I had maybe passed them before I should have, and could I really keep up this pace?

There was a water stop at our turn around, and the only other girl I could see stopped there. I kept going, and then could see the other women who were behind me - and not that far behind. Even though this was supposed to be a "fun" run, I knew I was the lead female at this point and didn't want to let that go!

I managed to hold on to my lead for the last mile, and cruised across the finish line in 23:48 and first female finisher! 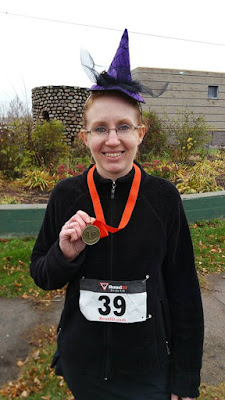 Technically, I'm not counting this as a PR because the course was short - 3.02 versus 3.10. But I think it probably would have been a PR. My current 5k best is 25:06, and I think I could have held out for another .08 mile in under 78 seconds. Either way, I'm pretty pleased with these results!

Instead of a tape for me to break like you see in the big races, the management team had to improvise with a ratchet strap from someone's truck. Ha! Oh well, it still felt good!

My splits were 8:02, 7:50, & 7:49. I have definitely never run consecutive miles at those paces, so I'm pretty happy with myself! My foot and it's ongoing tendinitis is not so happy, but it was fine on race day and Sunday. Just a little unhappy with the easy 3 miles I did Monday morning. Hopefully with some more rest and icing, we can get back to a happy place.

Have you ever run in costume?
Posted by Ali at 4:30 AM