Another Monday has rolled around, and while I drink copious amounts of coffee I will update you on our little life.

Friday we drove down to Duluth, as mentioned in my last post. While I was trying on 17 different pair of running shoes, Travis and Emily walked across the street to play at the Lakewalk and dip their toes in Lake Superior.

Unfortunately for Emily, Lake Superior had something else in mind. A big wave came along and soaked her bottom half. Thankfully we were going to a restaurant that had outdoor seating, so she was able to air dry a little before we went home.

I came home with these pretty girls. They worked ok for my 14 mile run on Saturday, but I don't think they're my marathon shoe. They pinch a little on my left ankle, but also slip in the heel so need to be laced up higher. 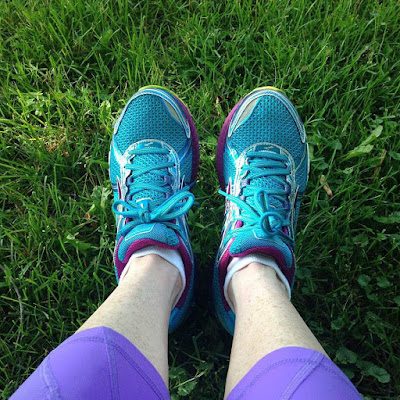 After my epic long run that morning, we got ready for 4th of July festivities. Emily has been asking "is it July yet?" for about a week, mainly because she wanted to play with the "sparkles" (sparklers) I bought at Walmart. So yay for it finally being July!


We were blessed with beautiful weather. Breezy, warm but not hot, and no rain! Everyone met up at my in-laws for a cookout, and we mainly just hung out in the backyard all afternoon. We set up a small pool for Emily, had tents up for shade, and lots of good food. It was so nice!

Since it doesn't get dark here until really late, we typically do not do fireworks. Seriously - they don't start until 10pm. That's way past everyone's bedtime! So we just had sparklers, and a few small fireworks at home.


Despite being told not to to touch it multiple times, Emily still touched the burned part after hers went out and had a small burn on her finger. It turned into a little blister, and she's 100% ok. There's always got to be one casualty at a family get-together!

On Sunday, the three of us just stayed home and recuperated from all that sun and fresh air on Saturday. We had some things to do around the house, grocery shopping to do, etc. But it was too nice of a day to spend inside, so I made Travis fill Emily's pool up and we spend a few hours playing in the pool. 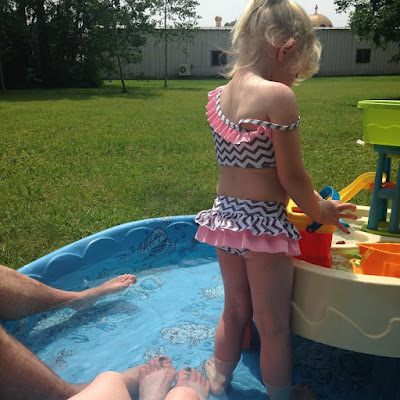 Well, Emily played. We sat in lawn chairs with our feet in the water. Rough life!

How was your weekend? Did you survive the holiday fireworks?