Just one more post about my trip to Florida, and then I promise I'll quit.

So, obviously, I had planned to run while we were in Florida. My carry on was pretty much only running related items: shoes, extra running outfit, rain jacket, light-weight jacket (definitely not needed!), running belt, Garmin watch, charger, etc. Heaven forbid that stuff get lost!

I planned on running 3 times while we were there, and had kind of mapped out my runs before. I knew I wanted to do 3, 4, and 6 mile runs. I knew it would be much hotter and more humid than I'm used to, so I had no set work out goals in mind. I was just running to run.

My first run was the 3 miler, just to get my legs going again. I ran around my parent's neighborhood, which was shockingly very active for 6:30 am. That's when all the old people are out walking their dogs! Minnesota nice has rubbed off on me, because I say hello to everyone I pass. A few people didn't really know what to make of me. I started off kind of slow, and it was warm! So imagine my surprise when I finished up at an 8:41 pace! Surely that was a fluke.

The second run I decided to go down to the beach and run along the sidewalk that spans most of Delray Beach. It's about a mile and a half from one end to the other, but then crosses the road and runs in front of the huge mansions down there. Not a bad view! I couldn't see the ocean for a lot of the run because of the trees that grow along the way, but it was nice to hear the ocean and smell the salt air. That was also a pretty busy run! I think if you're running in Florida, you have to get up early to beat the heat. There were tons of other runners and walkers, also looking shocked when I said good morning. What's so wrong with being nice?!

Again, it was a hot one, but I still managed an 8:36 min/mile. I'm starting to attribute this to the lack of hills. Not even a little incline going on. Also, I was in a hurry to finish up and go dip my toes in the water! 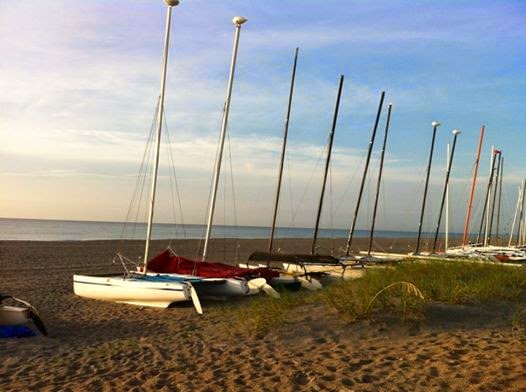 What's better than finishing up your run by going into the cool Atlantic Ocean? It was really nice to just hang out for a minute alone by the ocean before heading back to the house. Also, I ended up giving someone 50 minutes of free parking at the meter. Apparently you don't have to pay before 9:30 am, which was clearly stated on the meter but it was just too early for me to be paying attention to those kind of details. That's me, just paying it forward!

My final run was 6 miles on July 4th. This run had the one and only hill I encountered all week: a highway over pass. South Florida "mountains" are either bridges or land fills! Yuck! This was a good long run, although I only saw one other runner along the way. But the last part really nice. I passed an old horse farm, and some quiet, gated communities. Of course, I was just running by the gates. No entrance for me! This run was really humid and warm too. I was completely drenched in sweat by the time I finished up, but still managed an 8:57 overall pace. Pretty good to me.

I'm not sure if I would be such a dedicated runner if I had to deal with that heat and humidity all the time. Right now, I'm looking at those runs as Ragnar training (just a little over a month until we're running Great River!), as that promises to be a hot and humid two days.

I really love running when we travel now. I feel like I get to see way more of the area than if I skipped. Bonus, I get to eat more fun foods after a vacation run!

Do you run on vacation? Where have you had some memorable runs?