Part of living in Minnesota is going to the lake. I mean, the state nickname is "Land of 10,000 Lakes". Everywhere you look, there are lakes!

Which means that on hot days, that's where you find most people. Now, this Florida girl is definitely more of a pool person. I like to be able to see the bottom, not worry about what's swimming with me, and I believe a healthy dose of chlorine is good for just about everyone (the Surgeon General personally told me that, so I know it's legit). However, real pools are few and far between up here because of our long winters. So, over the past few years, I have been getting acclimated to swimming in lakes.

Ok, that's not true. What I do cannot be called "swimming". I put my bathing suit on, and stand in the water. Sometimes even all the way up to my shoulders if the water is warm. But usually my suit doesn't even get wet. We're still working on it, ok?

But when it's hot, it's still nice to dip your toes in. Since Travis grew up swimming in lakes, he's trying to get Emily used to it, too. I'm ok with that; I don't want her to be paranoid like her mama. So on Monday when the temps reached nearly 90 degrees, we headed out to Side Lake for a dip. 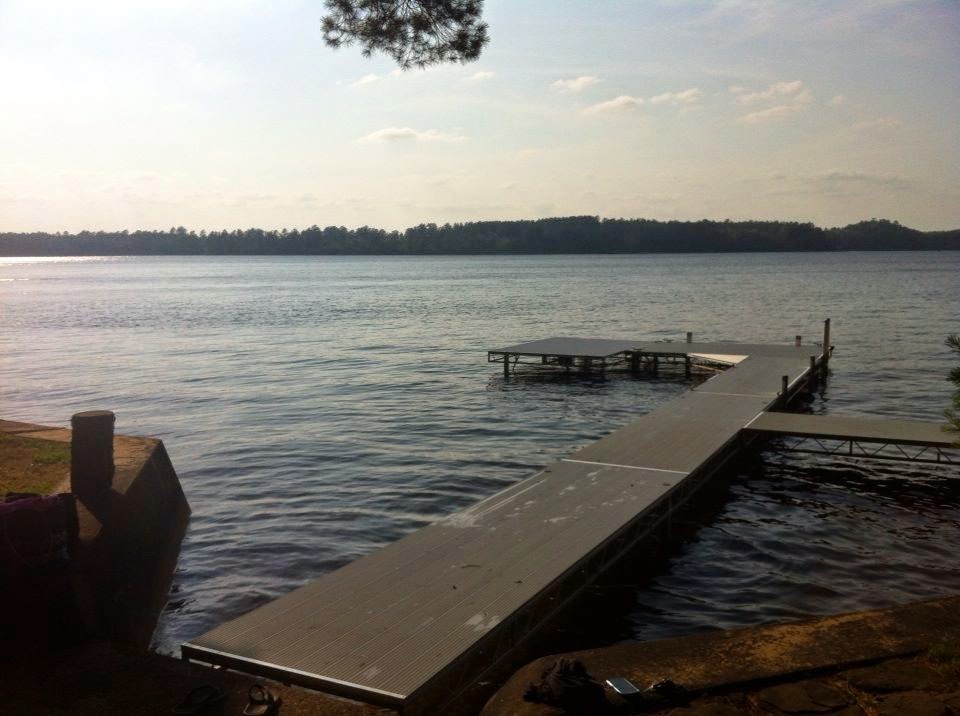 My favorite "beach" here is McCarthy Beach, which is a state park. You have to pay $5 to get in, or $25 for a season pass. The beach is long and skinny, but it's shallow for yards and yards, and they have a little kid section roped off. There's not much in the way of weeds or wildlife either, so I'm pretty comfortable there.

But instead, we went to a house at Side Lake. Travis build a slide for a customer that goes off their dock, and he needed to make some minor changes and thought it would be fun for us to go too. It was fun! The water is still really cold, but once you get in it's not so bad. Emily took a while to get up enough guts to stick her feet in, and then stand on the dock steps that are in the water, and then finally walk around in the shallow area on her own. 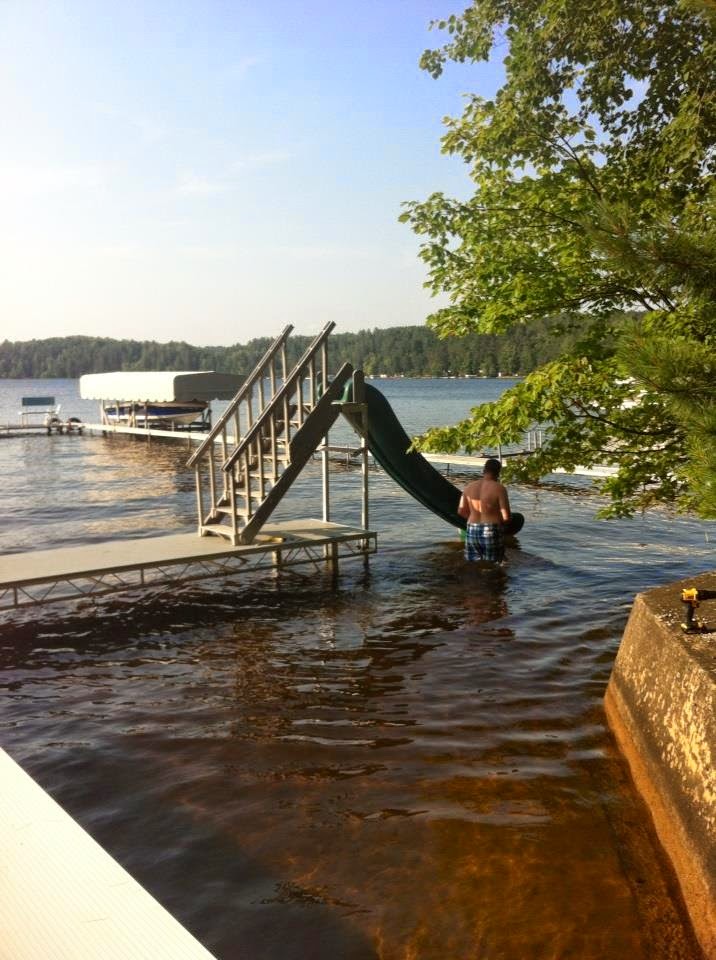 Imagine my surprise when she decided to go down the slide, all on her own! I was slightly freaked out at the idea, but Travis stood at the end and caught her. Once she started, she didn't want to stop! 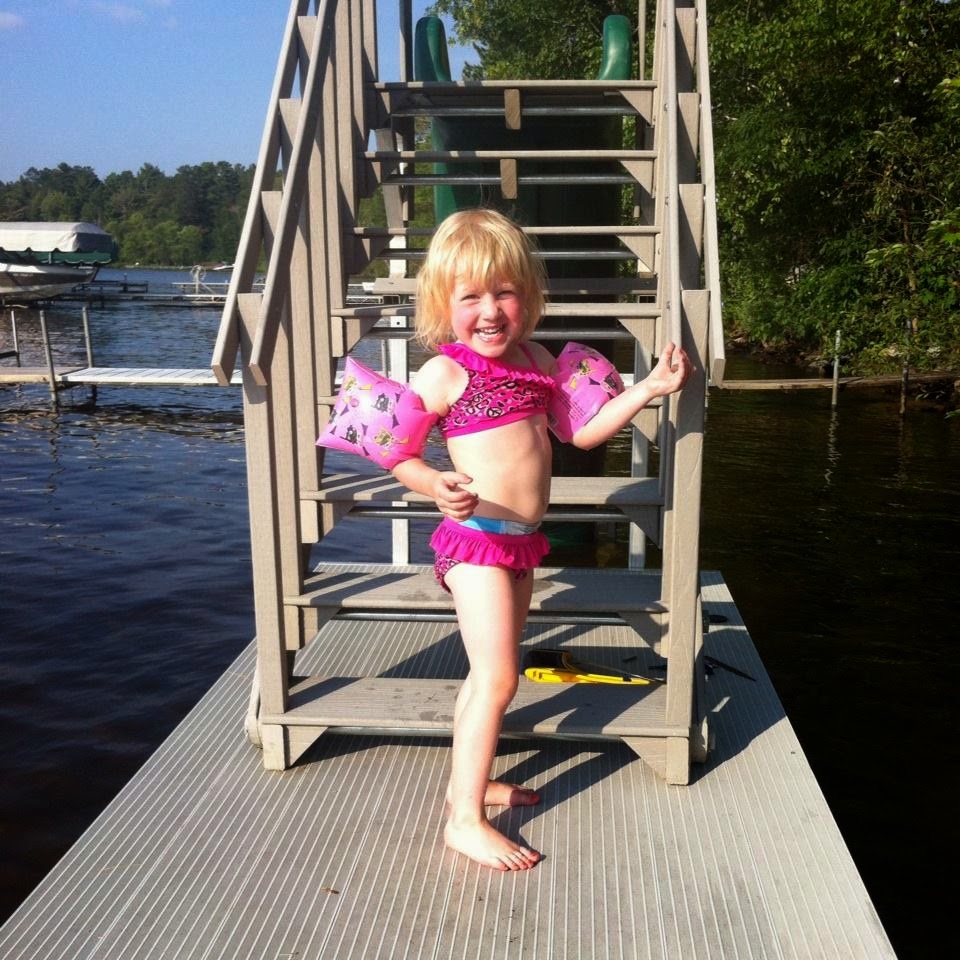 Eventually the sun started going down and the bugs started making an appearance. We literally had to pry her away from the dock, and I had to hold her hand while we dried off so she wouldn't run back out. She loved it! 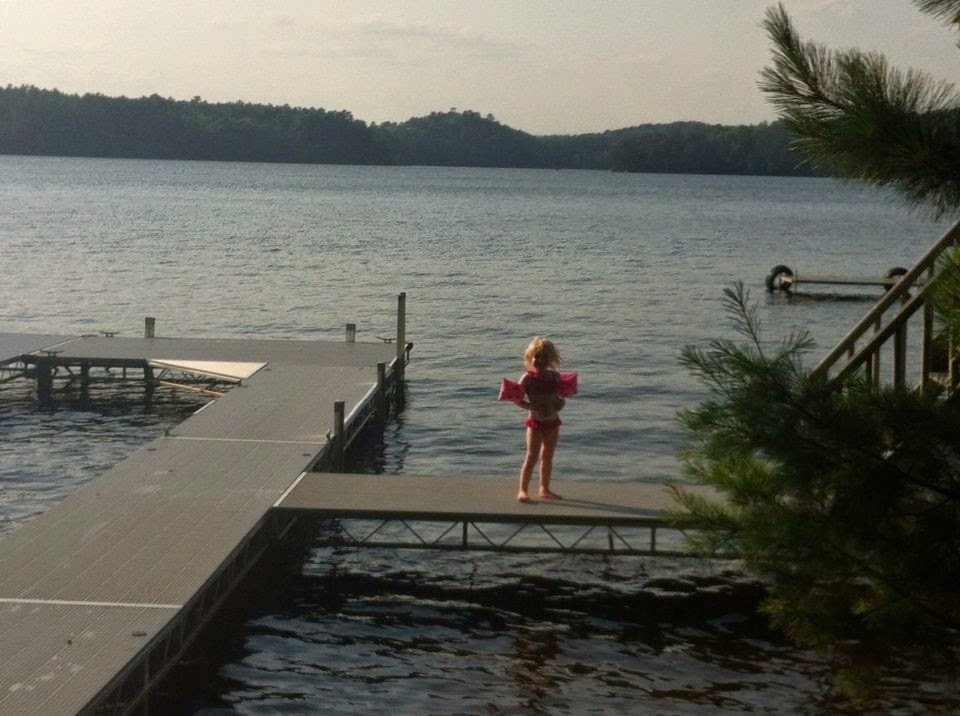