I probably sound like a broken record, but Joshilyn Jackson writes good stuff. Someone Else's Love Story is her latest novel, released back in November. I had to wait all the way until Christmas to get my hands on this book, but hubby surprised me with a signed copy. Ok, I admit, I was not all that surprised. I only sent him 43 emails with the links to buy the book. I was surprised by the inscription from Jackson on the inside. 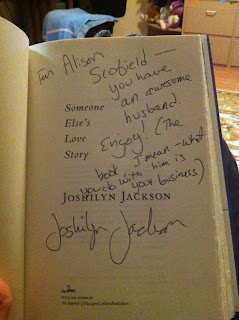 Funny stuff! Ok, on to the review.

First of all, this book is so pretty that it warrants being mentioned. The jacket cover is shimmery and pretty. The birds and fireworks at first will not make sense to you, but they are in the pages. You just have to pay attention.

The book is about Shandi Pierce, who is a young mother trying to finish college and keep the peace between her slightly over-bearing mother, her father, and her step-mother. When step-mother Bethany finds out that Shandi's young son, Natty, has scored off the intellectual charts, she suggests that they move closer to Atlanta to have "better opportunities". We later find out that Bethany has ulterior motives for this move, but that's really subplot at this point.

The action really starts when Shandi and Natty are on the way to Atlanta, with the help of Shandi's long time best friend Wolcott, when they stop at a gas station because Natty is getting car sick. What seems like an innocuous event turns to a life-changing one when the gas station is held-up at gun point while Shandi and Natty are inside. There, they meet William, and Shandi says that she fell in love with immediately. William is handsome, but he is also large and tries to protect Natty from the gunman. Of course Shandi would start to develop warm feelings for him.

They make it out of the hostage situation when William clobbers the gunman over the head with a glass paperweight, but he is accidentally shot in the chaos. We learn that William was once married and had a little girl who died tragically in a car accident a year to the day of the gas station robbery. Now that he is living the bachelor life, Shandi takes it upon herself to be his nursemaid. She invites herself and Natty into William's home, cooking, cleaning, and caring for William in the hopes that he will start to feel something for her. She does go home every night though, when Paula comes over. Paula is William's oldest friend, a successful divorce attorney, and does not take kindly to the presence of Shandi at all.

The relationship dynamics in SELS is very interesting. William and Paula are two broken individuals, for their own reasons. You could almost say that Shandi and Wolcott are a younger version of them. Although, I feel like Shandi is probably the most normal of all the characters we see in this book. Paula is loud, opinionated and has an interesting past. We learn that William's social skills are zilch, largely due to his Autism/Asperger's. Wolcott is a bit flamboyant, and uses poetry to woo conquests and express feelings like a young want-to-be Shakespeare.

Another interesting theme in SELS is how Natty was conceived. It's actually a big part of the book, and I don't want you to think that I'm making less of it just because I'm covering this last. Technically, Shandi was a virgin when she got pregnant and delivered him. She has repressed the memories of the night Natty came to be, but ultimately comes to terms with the fact that she was raped. However, I'm not so sure that that was the case. Yes, she was taken advantage of, there is no doubt about that. But I think there are opposing ideas to how the conception can be perceived. Without giving too much away, I will say this: we are in control of our actions and must deal with the consequences of such.

There's so much more I can say about this book, but I don't want to give away the ending for you, dear reader. I want you to read Someone Else's Love Story and love it just as much as I did. Love it or hate it, but read it. Jackson has such a way with words that you really dive headfirst into this story. She doesn't pull any punches, and leaves you guessing until the end. If you do read this, please let me know. I'd love to hear what you thought!
Posted by Ali at 7:26 AM