Updates from the Iron Range

Last week we got a box from my parents with some odds and ends in it, some t-shirts from their trip to the Keys, an afghan and some Christmas dish towels. My parents have also decided that the Northland needs an infusion of tacky, Floridian-retiree decorating so they also included two plastic pink flamingos. You know, they type that you put out on the lawn next to the garden gnome and your huge gazing ball. So after a week of deciding if we were really going to put them on the lawn or not, we came up with a happy medium: 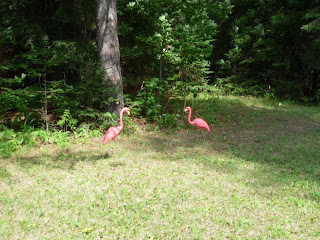 Tada! They're out by our fire pit! Now we just need some tiki torches and we'll be good to go! Actually, the little buggers are kind of cute, and Trav's Dad already commented that he liked our "birds" out back. Maybe we'll start a new trend!

Travis had his final interview with Country Financial, and we heard back on Friday that he got the job! Hooray! He starts on Sept 17th, as that's the beginning of their 4th sales quarter. His boss didn't want to start him at the end of a quarter and then obviously have a tough time meeting his goal. In the mean time though, he's been helping his Dad with odd jobs, including haying one of his uncle's fields. He took some pictures while he was supposed to be "working" so I thought I'd share those too. 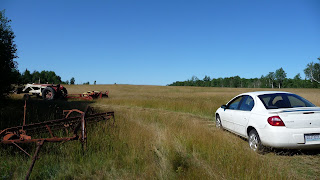 Here is the field he had to hay, and the big tractor. 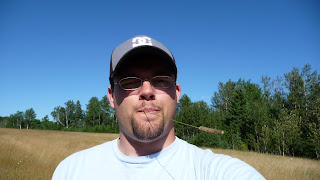 Part of his photo shoot, pretending to be a farmer. 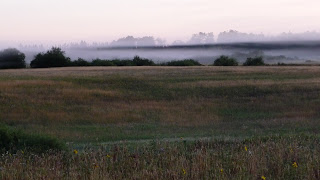 Here's a cool shot when he was finishing up 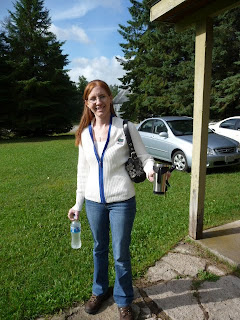 I also received another box from my parents this week with some Gator apparel in it. I can't forget my roots! And I think the UPS man is slowly starting to despise us - it's a long haul out here! Anyway, Friday was "College Day" at work, so I was able to wear one of my new sweaters. Here I am, sporting my alma mater, Gooooo Gators!!


Summertime up here is the season for growing, it seems like everyone's garden is crazy in bloom. You can even find berries growing along the side of the road if you're lucky! Saturday morning we went to Grandma Fran's house for some green beans, although I didn't know that this meant we would have to pick them. Oh well, I can be a farmer too! We picked some green beans, and they also had peas that were ripe for the picking so we took a bunch of those too. Fran came out just as we were finishing up and yelled at us for not taking enough, so we went back and picked a bunch more. She also has corn, carrots, beets, cabbage, spinach and some other stuff that I'm sure I'm leaving out. She also gave us a couple nice zucchini to take too, since she knows I like zucchini.

Having knocked off a couple of things from our grocery list, we decided to head into town to get the essentials. On the way, Travis mentioned he saw a good place for raspberry picking. So we swung by and holy raspberries! There was a ton! We didn't pick too many, but we got enough for a little snack. Of course we had the camera with us, so here are some picking pictures for your viewing pleasure! 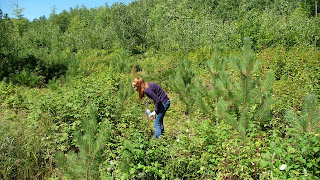 Here I am picking raspberries. They went up the hill behind me too. Crazy! 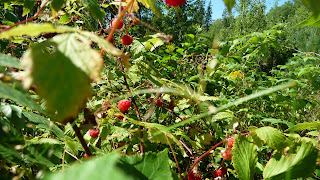 Here they are on the bush. 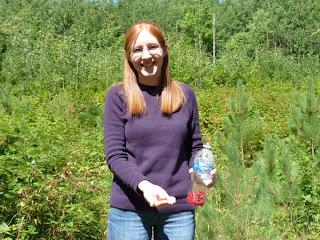 And here I am with our little pile of raspberries. We would have stayed longer, but there were a few threatening bees hanging around. We all know how I feel about bugs!


So that's our exciting life for now. I hope this finds you all healthy and well!
Posted by Ali at 9:59 AM