This weekend we set off to International Falls so I could run the Freeze Yer Gizzard Blizzard Run. They have a 5k and 10k, and since I was supposed to run 9 miles that day I figured doing both would be a fun way to get the miles in!

However, I wasn't planning on it being quite so cold. Silly me!

These races are part of the city's celebration of "Icebox Days". International Falls is known as the "Icebox of the Nation", so I should have expected cold. We've been having such a warm winter though, that I thought I might get lucky! Not so much.

I really was not sure that I would be running this. The entire drive up there, that night, even that morning, I kept thinking "I don't have to run this race. I really don't have to!"

Yet here I am, all dressed up and ready to go. 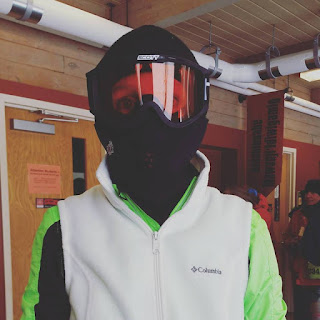 Laugh if you want, but this was actually a pretty good setup! The neck gaiter has some hole at the mouth, so I could still breath and didn't feel quite so claustrophobic. I can't tell you how many people said "Boy, what a smart idea!" Smart is maybe a relative theory here when we consider why I was wearing this to begin with...

Anyway, the gun goes off and 176 runners take off! I had planned on running these races at my easy pace, but the excitement and the cold made me run a bit faster. Honestly though, that felt like real work because it was so hard to breath in such cold temperatures. I finished in 28:15, 9:07 average pace, which is definitely one of my slowest 5k times ever.

I ran the first 2 miles with some running buddies from my group - we had a great showing of 8 or 9 members at this race! They wanted to go faster though, so I let them peel ahead of me. Then I found a runner going just about my pace, so I tailed him the rest of the run. He acted as a wind break for me, and gave me something to focus on.  When we crossed the finish line, I caught up with him and thanked him for pacing me the whole way. He was surprised and said "You were actually pushing me the whole time, so thank you!" Huh. You just never know who will inspire you, and who you'll inspire!

The races were pretty well organized, despite a timing mat snafu with the 10k. They started/ended at the community college, so we could wait inside and had real facilities to use instead of porta-potties.  Same day packet pickup was nice, and super easy. I'm not sure that I'll run these again, but that's purely because of the weather and has nothing to do with the actual races. Flat course, and tons of volunteers along the way. TONS of volunteers - I was really surprised and made sure to thank each one. It's one thing to be running in that cold, but to just be standing there was probably really cold!

The best part? I managed to place 3rd in my age group for the 5k! That's pretty cool for not really trying!

Do you run in winter races? What's the last race you ran for the experience and not the time?
Posted by Ali at 7:31 AM