The Rest of our Detroit Trip

Friday morning we pulled out of our driveway at roughly 1:30 am. Rough. I drove first, which I like to do because I don't trust my husband's navigational skills while I'm sleeping. Especially in the dark. This was reinforced when he got us lost in Escanaba, MI. after we switched and I tried to sleep for a bit. See? My fear is not unfounded. Also, I'm able to go to bed at like 6 pm the night before and typically get a few hours of sleep before it's time to get up and go.

Along the way, we drove through the Upper Peninsula of Michigan and along Lake Michigan. It was gorgeous. My pics do it absolutely no justice at all.

Then we got to drive over the Mackinac Bridge to the main part of MI. It was pretty cool! Very huge, and long. They were doing a little construction on the bridge, and the noise the road made sounded like "whales" to Emily. So now she is convinced that whales live in the the Great Lakes.

Once we got settled in Detroit, we utilized the People Mover quite a bit. That was awesome! It's basically an above ground subway, and only .75 cents for adults but Em was free. We took it downtown on Saturday to stop at my parents hotel, the Renaissance Center, and then on to Cobo Hall where the race expo and packet pickup were held.


After packet pickup, we met up with my uncle, cousin, and her two kids. Her oldest is about a year younger than Emily, and her youngest is just 2 months old! We had a light lunch, and then went to a place called The Robot Garage, which is a little lego heaven. They have several tables set up with different types of legos where you can sit and build to your heart's content.


Before we went to dinner, Emily just had to see Grandma & Grandpa's room. They were on the 50th floor of the Renaissance Center, and had a pretty good view! 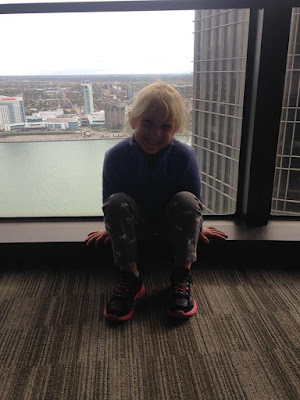 For dinner that night, we went to a place called Republic Tavern. Travis and I thought it was awesome, but it was a bit of a stretch for my parents. Their menu was a mix of small plates and main dishes, so we got a mix of a lot of things. I enjoyed smoked trout, roasted carrots, and creamy roasted sweet potatoes. My parents tried pierogies (amazing!), meatballs, and chicken pot pie with a chicken foot on top. That was weird! My uncle came with us and had to order the beef tongue. No one shared his plate except Travis. Two weird peas in a pod! Because of the way the menu is styled, there was a lot of waiting, and we were there for nearly 2 hours. Thankfully, Emily was really well behaved despite not really eating much and not getting her grilled cheese until nearly 1.5 hours after we ordered it.

Sunday was race day, of course. After the race, we were able to take the People Mover back to our hotel where we had to quickly check out. Traffic was a mess because there was a Lions football game starting up just as we were leaving, but we were able to navigate our way out of the city and move on to my other Uncle & Aunt's house where we stayed for the next 2 nights. For the rest of the day, we mostly just hung out at their house, ate, and I tried to nap. Unsuccessfully, but I think I was still running on some race adrenaline.

Monday, we went out to a nearby apple orchard for a little family fun. It was incredibly windy, so we mostly just stuck to the kid's area and playground. Luckily my aunt had this adorable hat to keep Em's head and ears warm. We weren't prepared for it to be so cold!


We also enjoyed some hot cider and cinnamon sugar donuts while we were there - a Michigan tradition!

We left Detroit on Tuesday around 6 am to start the long drive home. There were tons (TONS) of wineries along the way in the southwestern part of Michigan, and I was itching to stop at one. It was still pretty early, but we managed to find one that opened at 10 am. Lucky we did, because it was the last one we'd see for awhile! I did a quick tasting, and managed to do some damage in less than 30 minutes. The wines were pretty good - check them out at St. Julian Winery.

We finally got home around 10:15 on Tuesday evening. Our trip was made longer by a 1.5 hour stop in Chicago for a deep dish pizza experience, but I think it was worth it.

We're all still recovering a bit from our journey, but it was a great trip! If you made it this far, congrats and I wish I had a cookie for you!