I'm feeling pretty good this Monday morning, after a really nice night's sleep in my own bed. Going away is fun, but coming home is always nice too.

Friday night we dropped the kidlette off at Grandma & Grandpa's house for her own weekend of fun (camping - not my style!), and Travis and I set off for the big city. We stopped for dinner at an Applebee's on the way down, where I had a really nice steak dinner with grains and spinach from their low-cal menu. Unfortunately, within 10 minutes of leaving, my stomach felt like someone lit it on fire. The rest of the ride down was pretty uncomfortable, and definitely not how I wanted to start the weekend off!

I went to bed pretty much as soon as we arrived at our hotel. I booked a room at the Ramada Plaza Minneapolis, using Hotwire. You don't know which hotel you get until you've booked & paid for it when you use Hotwire, but you can choose the location and star rating. The Ramada was a 3 star with good reviews, and I was pretty pleased! The only thing that would have made it better was if they had some kind of little store to buy things like bananas or bottled water. They only have a restaurant and room service available.

Anyway, I woke up feeling about 90%, so I decided to try to get a run in. Although this trip was originally planned around the Minnesota Half Marathon, I opted out of the race and decided on an easy 6 miles instead. There was a trail right across the highway from our hotel, so I decided to chance it. My leg was a little tight in the beginning, but quickly loosened up and I had a really nice run!


Afterwards we headed to the mall to do a little shopping for some upcoming family photos, then we had lunch at a little place called Brasa, a really neat little place that looks like it's in an old mechanic's shop, with rolling overhead doors and everything. It's all open air, which was perfect on this beautiful day.


Then we headed over to the Minneapolis Sculpture Garden. We timed things just right with their "First Free Saturday", so we also got into the Walker Art Museum for free. Score!

After all that walking around, we headed back to the hotel for a nap before heading to dinner at Chino Latino. So fun! It's like a restaurant in a nightclub. The food is labeled as "street food from around the equator". I had chicken and barbacoa beef tacos. Travis ordered pork belly that came on steamed buns, and we shared "nachos" - black beans, cheese, tomato, sour cream, and jalapenos with plantain chips to scoop it all up. So good! We had some time to kill, so we took an Uber to Dangerous Man Brewing. Travis had met up with one of his old friends the night before (while I was sick), and they stopped over there. He really enjoyed the Chocolate Milk Stout, and he wanted me to see what it was like. Very low-key, hipster vibe. It's smack in the middle of a neighborhood, and seems like a really cool place to hang out. They have board games, and encourage you to relax and spend some time. I had the Peanut Butter Porter. When we were ordering our drinks, I asked the bartender what it was like and a woman next to me piped up: "It is AMAZING! I have dreams about the peanut butter porter, it is so good!". That sealed the deal for me! 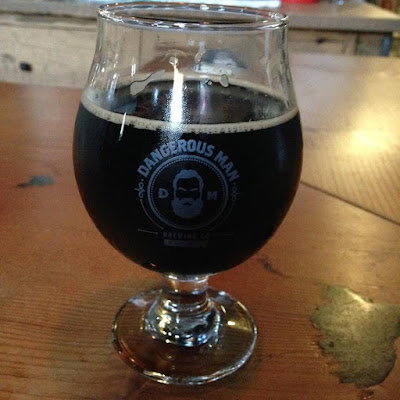 Honestly, it was that good! It smelled amazing, and had a very smooth taste. Not too peanut buttery; just nice.

We finally ended up at Aster Cafe, where we had spent an evening on our last trip to the Cities. They had a live band playing, Mike Mangione & the Union. They were really good, and we ended up staying for their whole set. "Orchestral Folk" says their website - kind of blues/jazz/folk mix . They had an electric guitar, acoustic, violin, and a cello. Interesting mix, but it worked!

Sunday morning we slept in a bit, then headed to the Mall of America. I've been a part of a great group of women who were all married in March of 2009. We originally all met on the message boards at the Knot.com, and eventually our group has moved over to Facebook. Many of us started chatting as early as 2007, so we've "known" each other for quite some time! Since we're scattered all over the country, meeting face to face doesn't happen often.

One of the girls from Chicago just happened to be in Minneapolis the same weekend as us, and another had recently moved to southern MN so she agreed to drive up. It was so fun to finally meet in person!


We went to Dick's Last Resort. Apparently their whole schtick is to be sarcastic and make fun of you. While that was a little weird, the humor helped to break the ice a little. Plus they give you these really embarrassing hats to wear.

Mine said "Moses wasn't the only one with a burning bush." Awesome. It was so fun to meet the girls and their families. I never thought it would happen since we moved to the end of the Earth!

So that's the end of our whirlwind weekend. Busy and fun, just the way I like it!

How was your weekend? Have you heard of Dick's Last Resort?