We just got back from St. Louis earlier this week and are now settling back into routines. I have a lot of laundry to do!

Since most of my family is in St. Louis, choosing to do the Rock'n'Roll St. Louis Half Marathon was kind of a no-brainer. The fact that it was in October was a huge plus too - I love STL in the Fall. The weather is crisp and cool, the colors are beautiful and hang on a little longer than our colors here.

The race started on Market Street downtown, with a great view of the Arch. We decided to stay downtown Friday and Saturday nights so that we didn't have to deal with driving and parking the morning of the event. Probably the best decision I made all weekend! Parking downtown is relatively easy if you know where you're going, but subtracting this headache from the equation just made everything go a lot smoother.

We stayed at the Drury Inn at Union Station. It's actually right across the street from Union Station at 20th Street, and one block south of Market Street. The starting line was at Market Street and Tucker, which is basically 12th Street. It took me less than 10 minutes to walk from my hotel room to my starting corral (#5). Talk about easy!

A shout out to our hotel - it was really great and we'd definitely stay there again. We had a slight drainage issue in the shower/tub, but other than that I was very pleased. They had a manager's reception each night from 5:30 to 7:00 with 3 free drinks for each adult, and tons of free food. The one night we checked it out, they had:

Basically, we could have eaten dinner there for free and had no issues. But it wasn't really the type of food we were hungry for either night. We ate at Landry's Seafood, right across the street from the hotel, on Saturday night. It was probably the best meal we had during the whole trip.

Anyway, back to race day. Since I walked to the starting line, there were no logistics to even consider and it was super easy for me to just get to my corral and wait. It was actually pretty cold that morning, and my legs were cold! Since it was a wave start, I guess I technically started at 7:05ish. 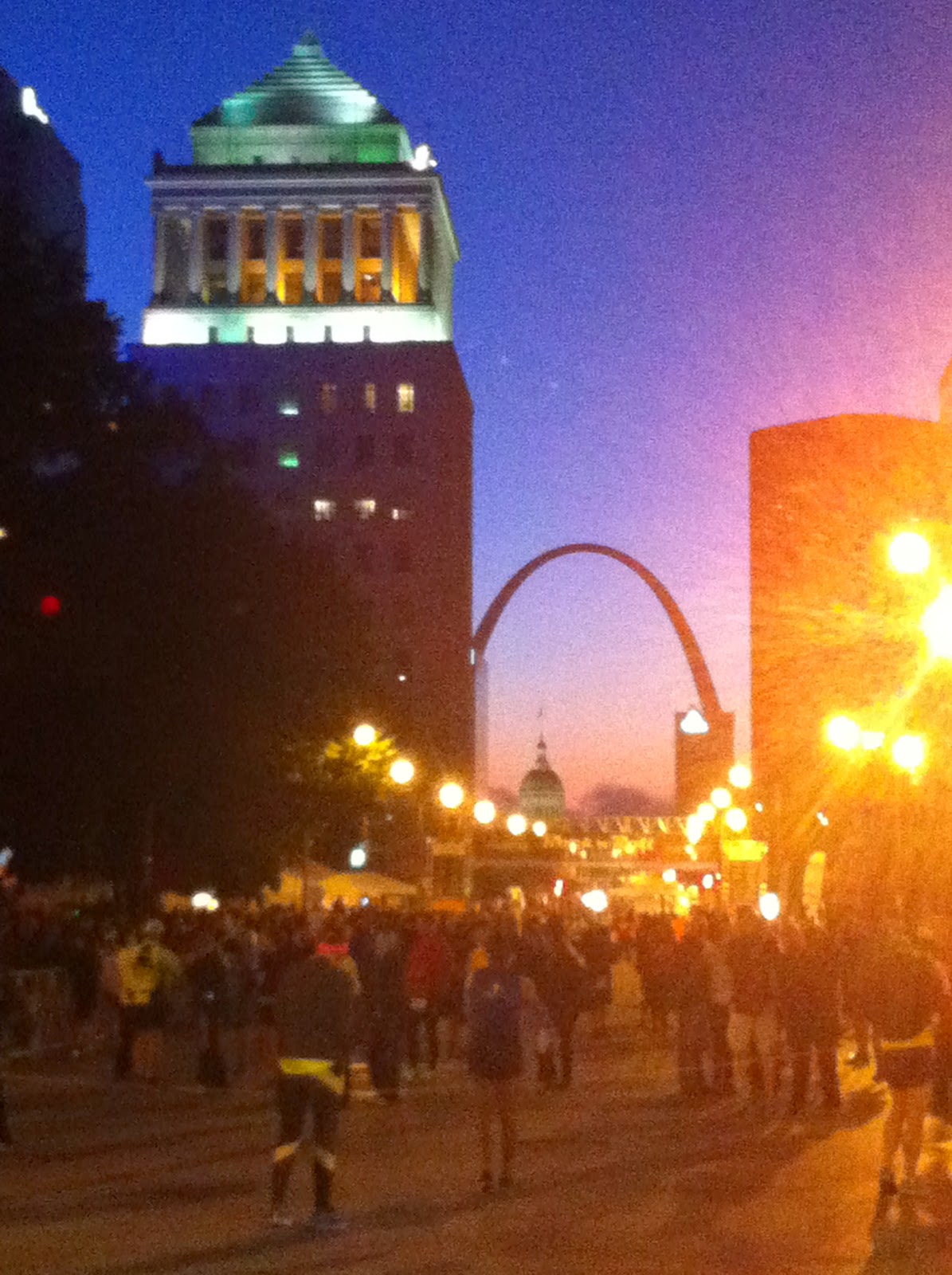 This was definitely the largest race I've done yet, and there were tons of people at the start. I did a lot of weaving in the first 3 miles or so. I didn't love the first mile, because it had quite a few turns as the course went downtown, past the new stadium and Ballpark Village, then back up a few blocks.

After the crowds thinned out a bit, I finally felt like I could get in a groove. I felt like I was running too fast the entire time, but I just decided to run by effort. This course has some decent hills, but they're all a moderate grade. The downhills definitely made up for it!

Rock'n'Roll events are known for their on-course entertainment. There were probably about 5-6 bands along the course, plus lots of cheerleaders/pep squads. I didn't care for the bands too much, but mainly because I listen to my own music. I wouldn't say I disliked that aspect, just could take it or leave it. I loved the cheerleaders though. They were all so cute!

Since the course takes you all through town, there were tons of places for spectators. That was the best part! I felt like there were crowds (even small ones with 10 or so people) just everywhere. We also got to run through the gorgeous neighborhood of Compton Heights. No crowds there, but plenty of spectators on their front porches drinking mimosas - catch my drift?

There were aid stations every mile or so, usually around the 1/2 mile mark, with water and Gatorade. I don't think any had GU, although I thought that was advertised. I carry energy chews with me though, so I wasn't really on the look out for these.  However there was not an aid station in Compton Heights. No water cup trash in their neighborhood, thank you ma'am!

I had stayed out too late on Friday night, and had way too much fun, so Saturday I was not feeling on top of my A game. Coming into the race on Sunday, I was feeling a lot better, but didn't have any high hopes of a great finishing time. I started out a bit fast, but was feeling ok. Around mile 5, my left leg/buttocks/piriformis area started getting achey, but not bad enough to stop. I kept up a pretty decent pace, and even stopped at a water station to grab a cup of water.

The finish line was a little like torture because it was an uphill to Chestnut, where you turned and kept going uphill. Come on, man! But then I saw my family cheering for me, and that gave me the extra energy to push forward! The last .10 or so is downhill, so then it was a race to the finish line!


I couldn't have done it without my cheer squad, Minnesota and Missouri editions. It was so great having them there at the finish line!


The best part was being able to walk less than a mile back to my hotel room for a shower. Drury Inn also had complimentary water, towels, and snacks for the racers that day. Very cool!

If you live in St. Louis or plan on traveling there for a race, I would definitely recommend RnR. Packet pick up was smooth, the start and finish lines were seamless, and overall the race was just really great. We waited a little bit for results, but after a slight snafu with giving us Colorado's finishing times, they were still up by midnight of race day. Overall, great race!

Have you raced a Rock'n'Roll event? Do you love St. Louis too?
Posted by Ali at 8:01 AM