One big pat on the back

for myself. Here's why: 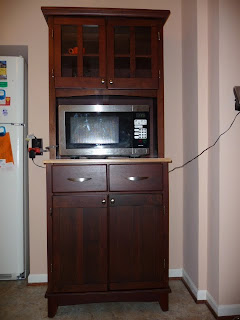 I made this! All by myself! Ok well, technically someone in Taiwan "made" it and then put a million pieces into a box and shipped it to my house. But I put it all together! And I have to admit that I'm pretty proud of myself. It only took 3 hours and a huge fight with some cam locks but it came out nicely!

Speaking of, did you know that a cam lock and a cam lock bolt are two different things? They work well with each other once you get it figured out, but yea, two different things. And I used a hammer to get some of the pieces in, but whatever. It's up, together, and won't fall down in the middle of the night!

Travis finally made it home from his two week training camp in Bloomington, Illinois. He was supposed to come home on Friday, but his first plane was delayed causing him to miss his connection in Detroit. Luckily Northwest/Delta was kind enough to put him up in a fabulous Best Western (insert tons of sarcasm here) and he made it home the following afternoon. I came home to find him investigating the outside of our house. Forgot that we gave his house key to his mom to feed the cats while we were both gone. Whoops! He was only outside for 10 or 15 minutes though, Trav is a tough guy!

One thing I'm learning about living in northern Minnesota is the kindness and generosity that the people have here. It is very common to see a flyer for some kind of benefit dinner a couple times a month at random restaurants/bars/community centers. We happened to have one at our community center this past weekend for a gentleman that lives near us who is suffering from cancer. It was a chili dinner, and they had prizes to raffle off. Let me tell you - I was amazed at the amount of people there and the amount of donated prizes. And not just like dish towels and baked goods - there was some good stuff! Travis and I bought tickets for Wild Tickets, a wine rack/shadow box thing that came with 4 bottles of wine and 4 hand painted wine glasses, and a free night at one of the casinos that included a dinner at the restaurant. Of course we didn't win anything, but it's the spirit that counts! I don't know the exact number that was raised but I know that it was a lot. Makes me pretty proud to live in this community!

The next big thing is a Halloween party at Bimbo's Bar next weekend. Travis and I will be going as a gypsy couple. Pictures are sure to follow!
Posted by Ali at 4:58 PM