Here I am, back in the northwoods of Minnesota. And the weather isn't so frightful today, although it's been pretty hairy for a week now. Last weekend Travis and I both left to go to Illinois for him and St. Louis for me. I had such a good time visiting with my family! Sunday we went out on Keith's boat and then went down to visit with Scott, Karen and the kids. Then Monday we had a winery day, hooray! Of course, I only have pictures from winery day - priorities, eh? 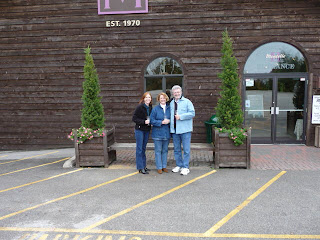 Here we are at Montelle, one of our favorites. The wine is great, the views are great, what more could you ask for? And of course I came home with a bottle. Only one though, shocking! 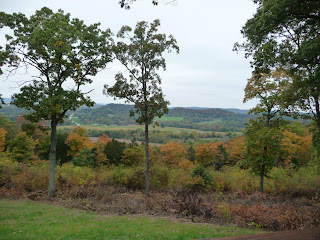 I told you, the views are spectacular! 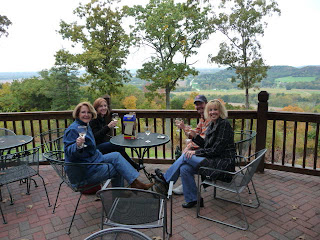 And here we are enjoying our wine. And those potato chips - they're so good! I can't think of the name right now, but oh boy are they yummy! 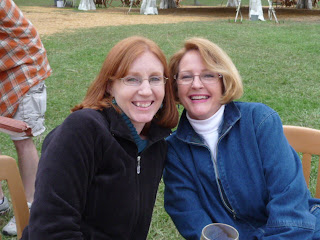 Here I am with my mom at Balducci's, and Keith's butt. That pretty much sums it up ;o)


On Tuesday Mom, Dad, and I piled into the car for the 13 hour drive back to my house. It was a loooong drive. Luckily Dad let me drive a little bit, like you know, maybe 45 minutes. He's such a trooper! Of course I'm telling them that the weather won't be so bad and it's not as horrible as everyone thinks. And then it snows Thursday. Just kidding guys! I did move to the North Pole!

While they were here we visited the Minnesota Discovery Center which is basically a museum dedicated to the Iron Range, and they also have different exhibits. This month was one called "Iron Dogs" all about the history of snowmobiling. It was pretty cool! They had antique snowmobiles from every stage of development.

Thursday we drove up to Ely, Minnesota which is the gateway to the Boundary Waters Canoe Area - basically right across from Canada. But they have some neat stuff there! We went to the North American Bear Center and got to see some black bears. They're pretty cute little devils! 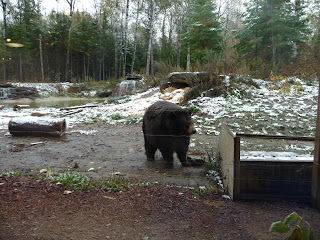 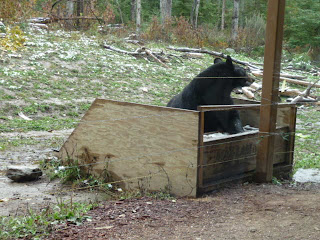 This guy is sitting on the scale they have built especially for the bears. They put food up on the little ledge and the bears come up on the scale, eat, and get weighed. The researchers at the bear center are very diligent about tracking the bears growth and health. They try to weigh the bears at least two times per day. I don't know how that works once they start hibernating - I don't think that they're very friendly waking up from that nap!


Ely is also home to the Steger Mukluk's store, where they handmake these shoes and boots out of moose skin. You can buy them online, but if you want to experience them first hand then you have to go to Ely as they have the only Mukluk store in the nation. Check them out! www.mukluks.com

On the way home from Ely (not pronounced Eli, although my parents are gunning hard to change the name of the town to Eli) we stopped at a lake along the side of the road that my parents thought was particularly pretty. 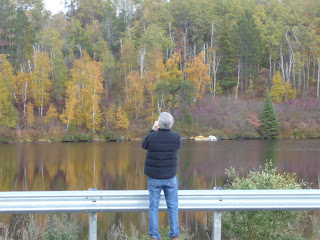 Here's my Dad being a tourist. He's pretty good at it! 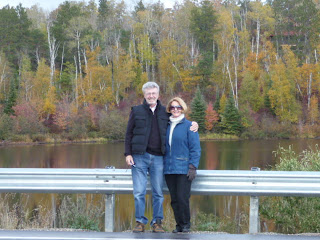 My good lookin' parents! Right after this my Dad found a big piece of slate to take home for his garden. Hopefully this wasn't some kind of national park - if it was, you never heard about this. The lake didn't have a name marker, so we've named it Eli Lake.


They packed up and left me Friday morning, and as always it was pretty tough to say goodbye. I'm not so sure about this living on opposite ends of the country thing. We'll just have to get good at traveling.

Last night was my first wine tasting, at my own house. It went really well! We had a great turn out of 12 people, and I think everyone enjoyed themselves. I personally enjoyed the Pedretti Pinot Grigio and the Paseo Cabernet Sauvignon, both of which can be found at www.myttv.com/Alison14231 . Go check them out! Oh and my merlot drinkers especially liked the La Vigna Mobile Toscano - I even let them take home the rest of the bottle (for a small fee (o: )

So that's the news from the Iron Range. Travis comes home on Friday, and I'm really ready for him! Hope everyone has a great week!
Posted by Ali at 11:02 AM