Or All Saints Day since I'm a day late. But whatever, this post is dedicated to Halloween! We had a great time last night at Bimbo's Octagon Bar where Shamrock'd played for the Fireman's Ball. There were some great costumes for sure! Since Travis and I are on a limited budget we put some things together and borrowed some things and voila! 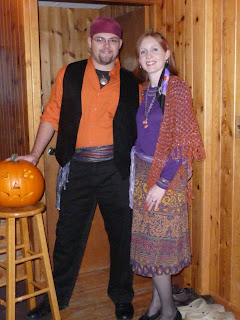 Gypsies! Trav looks a little more like a pirate, but all the pictures we could find online of a male gypsy were of shirtless men smoking cigars with a donkey in the background. It's a little cold to go that far! Of course, no Minnesota Halloween would be complete without snow on the ground. We only have an inch, but I think it's an inch too much!

As I said earlier, Shamrock'd was the entertainment for the evening. We had heard rumors of their costumes but no one had pinned them down yet. Here they are as: 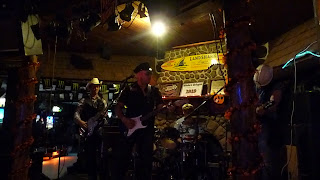 The Village People! Classic I tell you. Dan is the cop, Ian the cowboy, Zach the sailor and Eric is the construction worker. But what Village People costume would be complete without.... 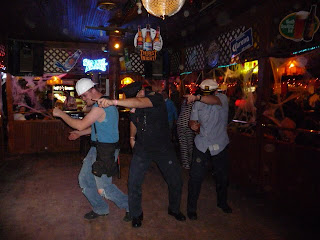 The YMCA Dance! We seem to have lost a cowboy here but it still works.

They say that Halloween is a time for ghouls and ghosts, that you never know what you might see on this magical night. I guess whoever "they" are were right because we really did see a ghost! 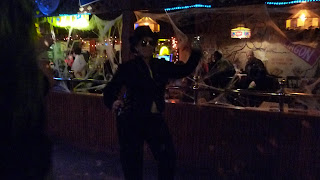 Michael Jackson is alive! It's amazing!


I'll save you from some of the racier pictures. Some of the "law enforcement" were taking their costumes a little to literal and started arresting people. All in good fun!

I hope everyone had a very Happy Halloween!
Posted by Ali at 8:47 AM