Well, the weather outside is frightful.... 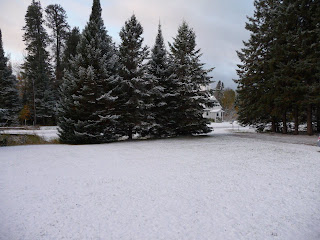 What's that you say? It's not even Halloween yet, you say? Bah humbug! The snow is here whether you like it or not! 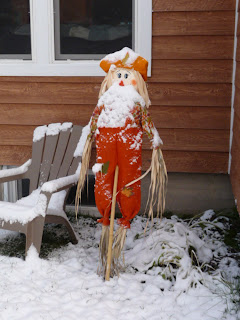 Here's the cute scarecrow that I just bought, literally two days ago, to make our house look a little more fall like. Now he looks like some weird snow-franken-crow with his snow beard. 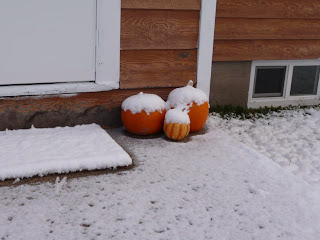 And our cute little pumpkins now have snow hats.

This one is a special request for my Dad: 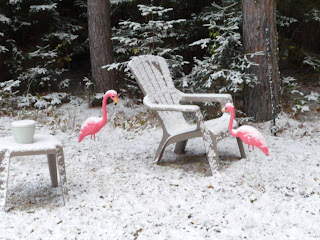 Flamingos in the snow!

So there you have it folks, our very first northern Minnesota snow. In October. The beginning of October to be exact. Looks like I'm in for a long winter!

Earlier this week I left you with the cliffhanger of my impending real estate exam. Tuesday I spent about 5 hours in the library studying, and Wednesday I spent another good 4 hours studying. Before I went to class on Wednesday I took a practice exam on the testing website. I thought I was being a good little student and that I had no worries. Man was I in for a surprise! The practice exam was completely different that I imagined it would be, and sadly I only scored a 66%. So of course, I was freaked out beyond belief with only about 12 hours to go until I had to take the real exam. How do you even prepare for that? Well, I went to class, reviewed my practice exam and Minnesota laws one more time, and then I left it in the hands of God.

The testing center is in Duluth, and I was told to arrive at 9:30am. Duluth is a good 2 hours away, which meant that I was up at 6 and out of the house at 7:30. The entire way there I'm sweating bullets, freaking out that I'm going to fail, and I called Travis a couple of times to look some things up in my book back at home. Good ol' GPS got me to the testing center right on time, and I walked in on shaky legs to get it over with. The test is split into two portions, the National and the State exam with 80 and 40 questions each. It took me an hour and a half to get through all the questions, second guessing myself the entire way but....

Hooray! I was so relieved that I nearly passed out. I walked out to the test proctor and double checked with him: " it said that I passed. So that means I really passed right? Like, I'm good? No jokes?" He looked at me a little funny but confirmed that I had indeed passed both portions. Yippy!

So since then I've been relaxing a little bit and getting ready for my trip to St. Louis. Travis and I both leave tomorrow out of Duluth at 8:15 am. We're on the same flight to Minneapolis and then we split there. It's going to be a long 2 weeks! But I'll make sure that I have lots of pictures for my next post!
Posted by Ali at 3:58 PM