I'm linking up with Tracy over at Change of Pace (formerly Tracy Tris) and Alyssa from Alyssagoesbang. We chat about our training on the last Tuesday of every month. So, I figured this post would be great for my 5k recap.

If you haven't been following me at all, I recently signed up for a training service at Runners Connect. I've posted weekly recaps of my training, which includes lots and lots and lots of really slow miles.

These slow miles had me worried. I know the science behind why we run slow (builds aerobic strength), but I was really questioning whether it would work for me.

Then I did a threshold interval workout that was basically a 5K with the target pace at 8:00-8:10, and I knocked it out of the park. So...I was feeling pretty confident coming into this race.

I woke up super early, despite this race being local. I think I was just excited, and I just needed to get out of bed. I went through my normal pre-race morning routine, and we lounged around watching Sesame Street for awhile until it was finally time to go.

I decided to jog to the race, since it's only about 5 blocks away. I made it an even mile by running some of my normal route. Travis and Emily drove there and we met up. They had all sorts of fun raffles, and we had a little time to check those out before the race began. Although I try every year, we won nothing despite spending $20 on tickets. Oh well, it's for a good cause!

Finally, it was time to race!

This year they had signs with projected finish times to line up by. I feel like our little "hometown" race is getting pretty serious! I lined up right behind the 25 min sign, hoping for good things. Then the gun went off, and we were flying!

Despite my best intentions, I started off way to fast. Everyone around me was excited, and the first 10th of a mile is downhill. We were all cruising! I think the most consistent thing I heard from other racers was "I started off to fast!" Thankfully, I was really paying attention to my pace and was able to slow down. There's no way I could continue with a 7:15 pace!

Once I got into a rhythm, I felt good. I realized in the beginning of my second mile that I had slowed a little too much, so I picked it up a bit. I passed by a friend who just ran Boston, so I said hi briefly and asked how she was feeling. Then we hit the third mile and I was able to kick it up another notch. I passed another friend who was struggling a bit. He, too, said he started off too fast. I just said "less than a mile to go, you can do it!" Then continued on.

Some of the last mile was directly into the wind, but I kept it up and passed a few more runners. The end of this race has a long hill that every runner complains about. I dug in deep and charged up the hill. It helped that some of my running group buddies were at the top and bottom of the hill cheering everyone on.

Finally, I rounded the last corner and raced across the finish line to a finish time of:

I think the best thing is that this pace was comfortably uncomfortable - not something I could keep up for a whole marathon, but doable for a 5k. To me, that speaks volumes for my overall fitness. I'm getting there! 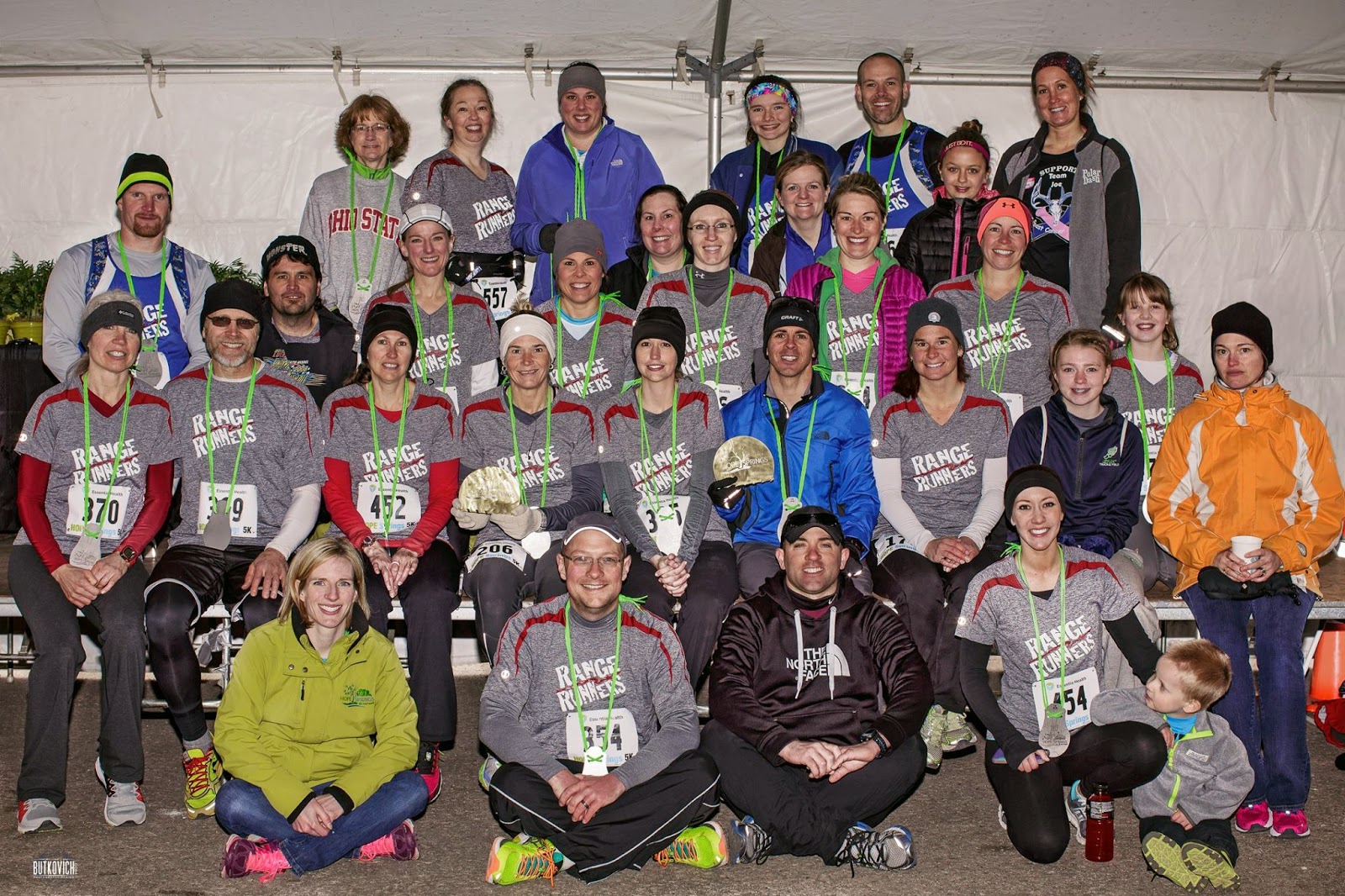 Our running group won for largest team, and fastest team! I'm behind the guy in the blue jacket, to the left. Mr. Blue Jacket won the race with a time of 16:55, and is the whole reason I started running with Runners Connect. Go Range Runners!

How's your training going? Have you ever run with a running group?

Link up with us and join in on the conversation!