Yesterday I was kind of down on myself because I ran 5 miles at a 9:16 overall pace. I know this is dumb to most people, and most people just wouldn't understand. But I know I can comfortably run faster than that in my prime, and I've been doing hills and fartleks in an effort to get back to where I was last summer before the Apocalypse Winter.

This morning, despite almost convincing myself to go back to bed, I went out and did hill repeats anyway. I read this blog post by Beth over at Shut Up and Run, in which she talks about doing 8 hill repeats. On a dirt trail. So I put my big girl undies on and walked out the door. (I also had all my other clothes on too, just to clarify).

Imagine my surprise when I stopped my watch at 3 miles and had a sub-9 min/mile pace!

Hills are kind of like doing speed work in disguise since you get to run a little faster on the downhill. But mile 3 was nothing but flat stretches. Whoop for an 8:39 pace!

The main reason why I was so tired this morning is because we went out last night. Not like we're big party animals though - we were home by 9:15! I scored some free tickets to the United Way of Northeastern Minnesota's "Flavor of the North" event. It's a food tasting/judging event with over 20 restaurants and vendors from around the area, plus free wine and beer tasting! Each restaurant prepares one dish in one of three categories: appetizer, entree, or dessert. Then we got to taste everything and vote for our favorites. All of the proceeds go to the Buddy Backpack Program, which supplies food to children over the weekends during the school year. To qualify, they just have to be on the free or reduced lunch program. UWNEMN supported over 600 kids through Buddy Backpacks this year!

I am a lame blogger because I had every intention to take pictures, but I totally forgot! In any case, this event was so much fun. I ate way more than I should have, but everything was so good! My favorites included walleye tacos with a pineapple salsa (they won 1st place!), a prosciutto wrapped jumbo prawn with jalapeno and a jicama slaw, bacon wrapped dates, and s'mores cupcakes. The cupcakes were truly drool worthy - I had two! They also won 1st place in the dessert category, and the prawns won 1st for apps.

They also had tons of silent auction items to peruse, as well as a live auction and a ticket-type auction. I'm not sure what the name is, but basically you buy X amount of tickets and put them in buckets for certain prizes. Then they draw a ticket out for the winner. I love to bid on stuff and help drive up the prices, but I never really win anything. So I was really excited to have won this painting by a local artist: 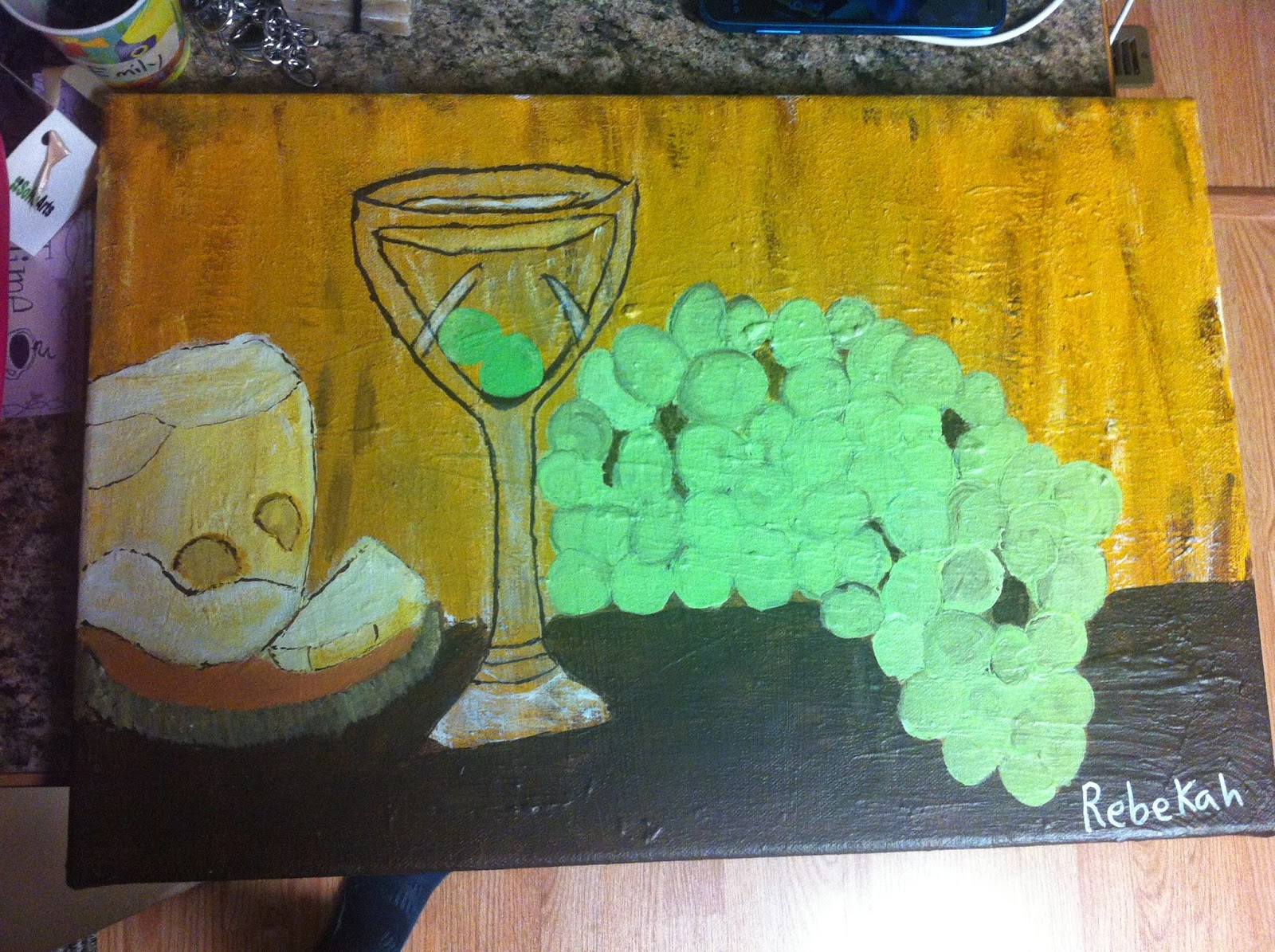 It was donated by a local art/gift shop called Soho Arts. All of the artwork that they sell is created at the Range Center by people with disabilities. I totally love that there is an outlet for that, and a business willing to support it. We have another painting of a big pear that I bought there. I got to meet the artist of my pear painting at the Hibbing Gallery Hop a few years ago. You could tell that he was pleased as punch that I bought his painting and truly love it. It hangs in my kitchen and is one of my favorite pieces.

This new painting will probably go in my kitchen as well. I'm thinking of doing a wine-themed display above one of the cabinets with this as a backdrop. I only paid $20 and probably would have gone higher, but I was the only bidder! I mean, it's no Picasso, but it's cute and supports a great cause! I hope that whoever "Rebekah" is, she knows that her painting was sold and hopefully encouraged to keep at it!
Posted by Ali at 7:16 AM