Book Review: Her: A Memoir

We're still dealing with frigid temps here in the Great White North, so I've been doing a lot of reading. I just finished Her: A Memoir, which is a really touching recount of one twin's fight for survival after her identical twin dies suddenly. 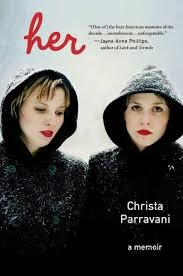 According to a statistic that the author read, 50% of the time the surviving twin dies within two years of the first twin's death. Cara Parravani died due to an overdose on heroin, a habit she started after a brutal rape a few years earlier. After losing Cara, Christa came very close to becoming a statistic. She stopped eating and turned to prescription pain killers. Pills to tell her when to sleep, when to wake up, when to feel hungry, happy...anything like normal. She moved from house to house, had affairs, divorced her husband, and even wound up in an inpatient psychiatric center. This novel traces her steps deep into despair and onto survival.

Losing a sibling is always difficult. Losing anyone is difficult. But I could really feel for Christa, the surviving twin, in the fact that losing your identical twin IS different. Maybe not worse or harder like some other reviewers question, but different. Identical twins share DNA. They are of one egg, separated during the first few days of conception. The second twin emerges from the original egg, pulling vital nutrients with it to survive. Often the "original" twin is the smaller of the two. Smaller and weaker? I'm not so sure.

Christa really shows her strength in this book, although I'm sure she felt nothing close to strong during the years after Cara's death. To lose the person whom you shared everything with, whom you knew better than even yourself - it's like losing half of yourself. But I think that maybe it's in the "original" twin's nature to be a survivor. Afterall, she survived losing half of herself at the very beginning.

Christa does a good job of laying everything bare for the reader to see and discover in this novel. She hides nothing. She openly admits to drug use, recreational sex, abortions - you name it. I feel like Christa wrote this novel not for critical acclaim, but as a cathartic experience to make sense of her grief and loss. While it certainly could be a depressing read, I appreciated the knowledge about being and losing a twin that is presented.
Posted by Ali at 8:52 AM