I Live for the Applause....

Recently, an article written by Chad Stafko has made it's rounds through all my running blogs. "Ok, You're a Runner. Get Over It" talks about how runners are so full of themselves. We wear running clothes labeled with running quips, shop at running stores, and put stickers on our cars so the world can know that we are (AWESOME) runners. He makes fun of those of us that are up at 5am, out the door and running in our reflective gear, stating that we're doing it for attention.

I'm not too sure if his rant is simply that: a rant meant to air some steam about an innocuous group that maybe he has a thing or two against. If that's the truth, I have a simple idea to Stafko: get over it. Or maybe, he just had a deadline and picked an easy target. It's true that the number of runners is up in the past few years. I'm one of those that have joined this sport in the past few years, so I can't deny that fact's truth. Whatever the case, I figured that I would air my ideas and thoughts on this as well.

Truth: I do get up before 5 am to go running. I wear reflective gear. Guess what? It's really dark when I run, and the idea of getting run over does not appeal to me. But also, I typically see less than 10 cars at that time in the morning, and maybe 2 people. I sure don't run at this time to show the world how awesome I am. If that were my true intent, I'd pick a busier time of day to display my athletic prowess.

Truth: I shop at running stores. Uh, duh. Runners work there. They test out the stuff. They have good feedback on what works. I do not like blisters or uncomfortable clothing or shoes that will hurt me. The typical worker at Box Store Sports USA does not have this information. However, I also shop at Box Store Sports USA once I've found tried and true products that work. I like saving money, too.

Truth: I am a new runner. I'm one of the millions that have started running and racing in the past 3 years. I think Stafko quotes a stat of 2.5 million more runners this year in races than in 2010. But let's look at the facts behind that: running is relatively cheap. When you get to the bare bones of it, really, all you need is a pair of sneakers. Your average Couch 2 5K'er is going to be working out in t-shirts and discount store running shoes. I've been there, and that worked for me. For a very low start up cost, this sport is easy to get into. When you look at other sports, the costs are much higher. This I know since I used to ride and compete in the equestrian world. When you consider board of a horse ($500/mo minimum), show clothes ($500 min again), entrance fees ($100?), trainer fees ($100), trailering, stall fees, gas, lessons, shoes, vet care....oh the list goes on and on....running is cheap. In our recent economic downfall, running has been a no-brainer when it comes to choosing a sport.

Truth: I have a 13.1 sticker on my car. It's new. It's shiny and pretty. It was well earned. I spent many, many Saturday mornings running my butt off, taking time away from my family, and getting blisters on my feet, to earn that sticker. There literally was blood, sweat, and tears put in for that sticker. It may not be as fancy as a 26.2 sticker, but I'm damn proud of it.

Running is an incredibly mental sport. Do you know what kind of motivation it takes to get out of bed at 4:45am and get your butt on the road by 5:15am? When it's 20 degrees outside? If you do, please let me know. I do this, but it's not without HUGE mental hurdles. One of my favorite blogs is called "Shut Up + Run". This is what I have to tell myself most mornings. I don a headlamp and reflective gear not because of the attention it gets me, but because running is good for me. It's good for the body and soul. But before 90% of my runs I have to say "Alison. Shut up and RUN". Yes, it is easier to stay in bed, to sleep another hour, to be cozy and warm at home. But my body will not thank me for that  in years to come.

So, you might be saying "well, do you have to do it to the extreme? Do you have to do 13 miles, or 26 miles, or whatever?" No, I suppose not. But you know what's not fun? Settling. Ok, so you've run 3.1 miles. That was fun, yay for you. You run the same 3.1 miles every run. What fun is that? I mean, if I'm going to do something that is hard, I at least want to have fun at it. You know what is fun? Besting myself. Pushing myself to limits that I didn't think I could reach. Ok, maybe not when I'm actually doing it. But when I get home, after the shower, after I eat a banana and put on my comfy clothes, when I sit on the couch and finally relax, I think: wow, look what I just did. That's pretty cool.

That's why I run. Because there's not many chances that I, your average mother and wife, get to actually do something myself that is COOL. My daughter is cool every day in the things she does and says. My husband tells me cool stuff all the time about things he finds on the internet or something he's made. But it's not often that I get to say that I did something cool myself.

The races are the coolest. The races are where it all comes together. The training runs, the eating right, the research and buying the right clothing. All that comes together at a race. It doesn't matter whether it's a 5K, 10K, half or full marathon. We all run races because it's the time where we get to prove ourselves. But who are we proving to? I learned awhile ago that even though I am a very competitive person, I really can't compete in running. There will always be someone faster than me. Someone younger, taller, thinner, with longer strides, or more experience, or whatever. Races are where we get to compete against ourselves. But then, that mental thing comes back. The what if's, the "I'm tired, I can just stop now, why am I doing this???", the negative thoughts.

Even though running is an incredibly singular sport, we rely on those supporters. Those dads, husbands, moms, brothers, sisters, friends, and strangers, that are willing to come cheer us on. Who make signs and take pictures. Who maybe don't understand, but are willing to support us anyway. The people who are the direct opposites of Chad Stafko. The people who say "You are a Runner! Keep going! You're doing great! You can do it!". Because we all need a little cheering every once in awhile. We all need the applause. 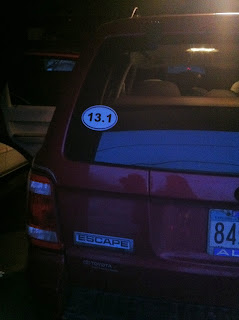