As with any house, ours is far from perfect and there are tons of things that I would like to change/decorate/renovate. Shocker, right? Travis and I (me mostly) decided that the best plan of attack is to write everything down. That way we can prioritize, check things off, and basically get them out of our (my) heads. I'm proud to say that we kept it all on one sheet of notebook paper, but there are definitely about 25 things on the list. Ranging anywhere between gravel for the driveway, new windows, to a hot tub for the backyard (guess who put that one on the list?).

The first items on the to do list are as follows: replace basement windows, put up gutters on east side of garage, replace rotting fascia in southwest corner of family room. So we had some people come out to give us quotes on these three things, since I wasn't sure if we could do any of this stuff. Heck, I can't even pronounce fascia - I say it like fascist. Well, when the first quote came back at $1200, including almost $400 for the fascia, I said "heck with that! Let's go to Lowe's!" 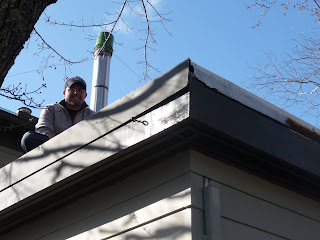 Tada! Fascia replaced and repainted! You can barely tell too. The new part is from that screw thingy sticking out on the left side, to the corner, and down about a foot or two on the right side. Travis is up there with some kind of roof sealant. (Umm yea, this is where my girl genes kick in). Then we'll put up a new gutter along the right side. Good practice for the one we're planning on putting up on the garage. Total costs for this project: ~$80 or so. Take that Mr. Contractor!

Luckily we did have some handy help by way of one of Trav's friends, and his brother. Although his brother mostly just pointed out what they were doing wrong, bought a new hammer for us, had lunch and then left. Ah well, at least we got a hammer out of that, right? Oh, and ignore the big ugly smoke stack sticking out of the roof behind Travis. We think there used to be a wood burning stove in the family room, because we have a big hole thing (filled in of course) on the ceiling in there. We're thinking that if we take down the smoke stack, there will be a big hole there, so we'll take care of that when we redo the flat roof next summer.

So that's one thing I can check off the list! We're still going to have someone do the windows though - that seems like more mess than I want to deal with. But I'm pretty proud of my husband's handiwork and our ingenuity.

Besides our projects around the house, things are going swimmingly. Travis has had a lot of business lately, so that's keeping him busy during the week. I think the home show really helped get him some exposure! I've been doing a little more training at Disability Specialists (DSI) for my new job, even though I still have a week until I start. I'm glad about the training though, because I wasn't sure if I would get any. Just doing data entry doesn't really teach you anything! So that's been good. One of the highlights of my day this past week was coming home to these cuties: 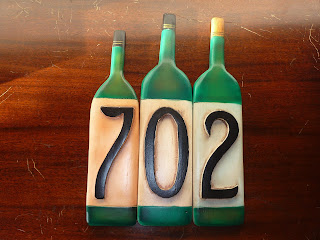 Wine bottle house numbers! Courtesy of my fabulous brother and sister in law in Missouri. Love them! I'm very excited to put them up, we're just not sure how we want to do it yet. They have sticky strips on the back, so technically we could just stick them to the house. But with our extreme cold temperatures, I'm not sure if they would stick all winter. So we're thinking of getting a board to mount them to, then mounting that on the house. That's an upcoming project too!

Our weather is warming up quite nicely. We've reached 50 a few times already! That means it'll be landscaping projects soon. This is a completely new area to me, and it's a little intimidating. Mostly because I have no idea what to do here. But we'll start small - like grass seed for some of our dirt patches in the backyard. We just need to see 60's a few times before we get to it!