Merry Christmas to all!

*Disclaimer* I know it's not very PC, so if you choose to celebrate something different, please insert that holiday's name in place of Christmas.

Well, another holiday season has come and gone. I have to admit, I'm not too sad to see it go! With money being pretty tight this year, it just added a lot more stress to the holiday season. But Travis and I are both blessed with incredibly wonderful families, a roof over our heads, food on the table, health and one another. What else could one ask for?

This is our first Christmas spent actually living in Minnesota, so it was a little different for me. I campaigned pretty hard to drive down to Missouri for a day to spend it with my side of the family, but common sense won out. It turned out to be the right decision though - we've been slammed with snow since Christmas Eve! The roads haven't been great so it's probably a good thing that we didn't chance the drive.

Christmas Eve we walked over to the church for the candlelight service. As I mentioned before, Travis volunteered us to light the advent candles. I was a little nervous, and it didn't help that as soon as we got there the Pastor said "ok well we're going to do that first, so are you ready? I'm starting now." Umm, ok! I read a little too fast, and Travis lit the candles a little too slow, but in the end we did our job and no one complained. After church we went to Trav's parents for dinner. We had a great time socializing, eating, and playing the Wii. I'm still sore! I guess I got a little intense with my bowling.

Christmas morning we woke up (kind of early for us) to open presents and spend some quality time with each other. Now, I'm going to share some pictures, but I have to warn you: first thing in the AM is not the prettiest picture of me. Bare with us here. 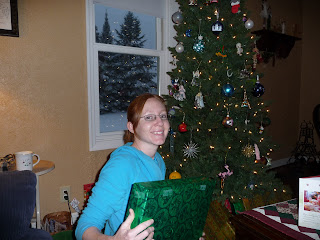 See? I told you! Unfortunately you can't see the mounds of snow coming down outside. Trust me - it was buckets full. 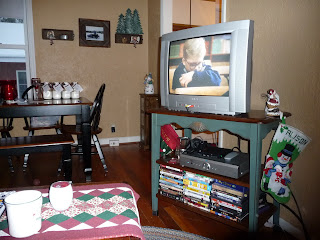 OF COURSE we watched "A Christmas Story"! Unfortunately I seem to be the only one up here with such an affinity for the movie. We didn't get to enjoy the day long extravaganza of "F-ra-gi-le" and "soap poisoning!", but I made sure we watched it twice just for good measure. 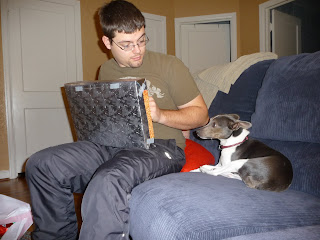 Even Maya got in on the present action. She has decided that the couch is her permanent new home. If you sit there, you must pay attention to her, tell her she's pretty, and give her lots of pets. Or else. 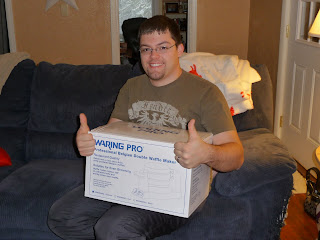 We love our new waffle maker! We're trying it out tomorrow, so excited! It makes 2 at once! 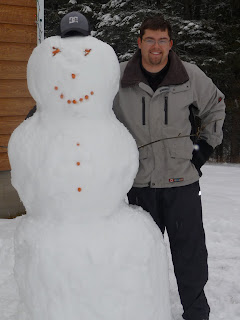 After presents we went outside to play in the snow! Travis thought it would be a good idea to make a snowman, so he used all the snow off our sidewalk to make the base. We have since invested in a snow shovel so he doesn't have to make a snowman every time the walk needs to be cleared. Not to brag or anything, but I made his head and got his arms from a tree! 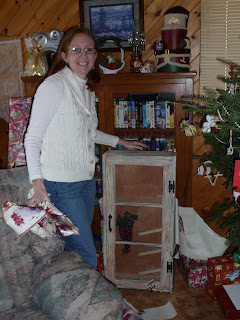 We eventually mosied on over to Dave and Leslie's house to give and get gifts. They got me this really cool wine cabinet! The front is actually an old window out of the basement of the house we live in. A couple from church make these, and I had asked them a few months back to let me know how much they cost so I could buy one. I never heard from them because apparently the in-laws called them up to buy it for me! So cool! 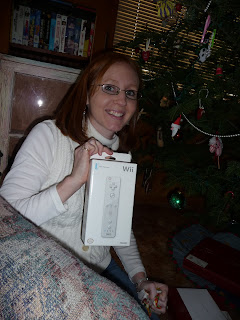 They also got us a Wii! The whole game system, not just the controller. Travis has been playing it a lot, but I've been a super wimp about being sore from the first night playing on Christmas Eve. And it looks like I'm the only one that was opening gifts but Travis decided to play sole camera man for the day.


Traditionally Trav's grandparents host a big shindig at their house a couple of days after Christmas. Well with Ray's poor health and Christmas falling on a Friday, I think everyone thought it was a good idea to just hold the party on the actual holiday. So we went over there for dinner and visiting with all the long lost family. Grandma and Grandpa Scofield live on a pretty limited income, so typically they give homemade jams and canned foods. This year, they said no gifts because a lot of their money has been going to medical bills. Well the kids couldn't accept that, so what did they get for their parents? A new toilet of course! What every person needs! Actually there is some use to it: the one they have is very short and it's harder for Ray with his limited mobility, so he needed a bigger, taller one. Well: 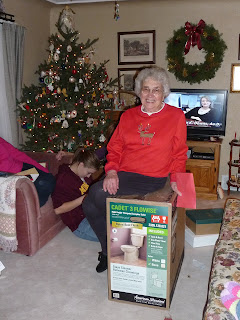 Tada! Here's proud Grandma Scofield with her brand new toilet! Of course it's in the requested color of almond because that's the color of the other one in their downstairs bathroom. Your toilets have to match you know!

Well, that's Christmas for us this year! Happy Holidays and a Happy New Year! 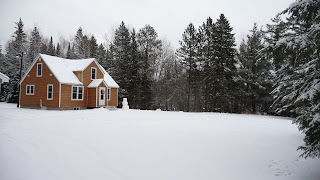