The countdown has begun! It's officially "Christmas week" and the festivities are on. This weekend we attended the kid's Christmas program at church. Travis landed a solo playing "We Three Kings"! Who knew he was a kid, eh? Anyway, he did awesome! I have a feeling that they're going to try to make him play a lot more now. After the Christmas program I was notified that he volunteered us to light the advent candles on Christmas Eve. Good thing there's a script! All we have to do is read from it and light the candles in the correct order. Doesn't sound too hard - so here's to not messing up!

We've also decided that since we're having our first Christmas in Minnesota, that we need to mix in a little of my traditions too. So the plan is to go for a Chinese lunch before the Christmas Eve service. I know it's weird but that's what I do!

Since funds are tight this year, I decided to make Christmas gifts instead of buying them. Here's what I came up with: 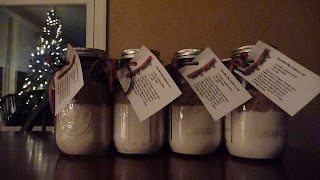 Cookies in a Jar! All the dry ingredients are in there for you to make chocolate chip cookies, all you have to do is add an egg, butter, and some milk I think. There are 12 of these bad boys and let me tell you - it was tedious work! But they came out pretty good in the end. I hope people enjoy them! 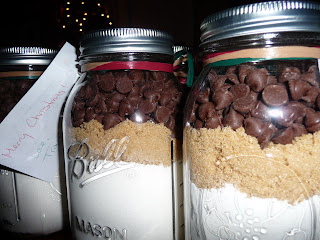 Oh yea, some chocolatey goodness! So that's all we've been up to this week. Merry Christmas to all! 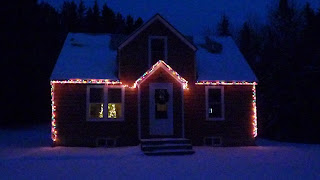