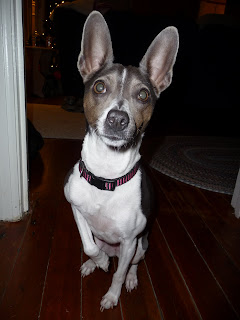 I finally broke Travis down - we got a dog!!! Her name is Maya, she's a 3 year old rat terrier. My, what big ears you have!!

I saw a posting on Craigslist for her, and the owner basically said that if she couldn't find a new home then she was going to the pound. A well behaved, potty trained, adult dog? That's craziness! So I emailed the owner and haggled with her about the "rehoming fee" that she wanted to charge.

Eventually she emailed me saying that a family with 4 kids had adopted her. One of the daughters was crying for a dog for Christmas, so she thought it would be a perfect fit. Yea, I'm sure a family of 6 has plenty of time to spend with a dog.

So we took that to mean that we weren't meant to have a dog. It is kind of a crazy idea anyway - not sure I'm using my best judgment in the situation.

Then Monday evening I received an email from the owner again, she had the dog back because the little girl wasn't "bonding" with her. Go figure. Would I still like her? Heck yea! So after some last minute planning, we are the pround new owners of Maya! Formerly Nya, but we didn't care for the name. 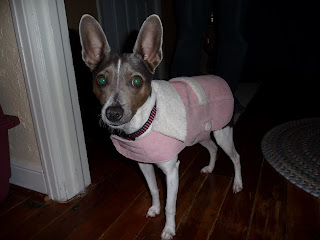 Here she is in the coat we bought for her. It's cold outside! Luckily the pet store was having a big sale, so we got this snazzy little number for $10! She came with a crate, 2 beds, leashes, collars, toys, and food. So the transition hasn't been to difficult for her.

She seems to be very well behaved. She "tells" Travis when she needs to go out, she listens to our commands, and she's pretty much just a big cuddle bug. I think she's decided that she likes us already and is settling in nicely. 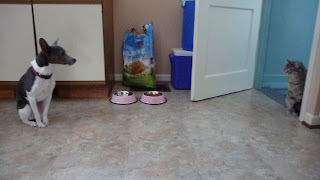 The only issue we're having so far is everyone adjusting to each other. So far there are a lot of standoffs like this. Chloe just stays in our bedroom, but Zak is interested in coming out and sniffing around. Just as long as Maya doesn't notice him! There's been a lot of hissing and whining, but nothing serious. One of the good things is that Maya sleeps in her crate at night, so the cats can roam around freely then. And torture her by sniffing at her cage. They'll just take some time to get used to one another! 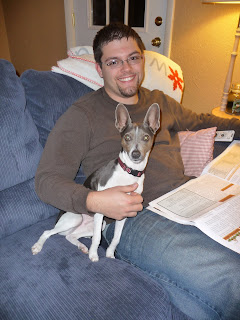 But as you can see, she's already become a part of the family! What a great Christmas present!
Posted by Ali at 9:48 AM