Saturday  - 90 minutes on the indoor bike. Thank God for Netflix. Also? My butt was so sore. By the end it was taking all I had to stay on the bike and finish the ride out. I'm thinking I need to invest in padded shorts or something. I already have a gel cover on the seat, so I'm not sure what more I can do!

Sunday - Pilates booty day. I kind of love it! I threw in a short obliques workout too, just 3 minutes, because I felt like the Blogilates February calendar was kind of skimping in that area.

Monday - Today I did 45 min on the bike, then 30 minutes of pilates - a quick cardio/fat burning workout followed by some abs and back stuff. Also, obliques are sore! Proof that I haven't been working them enough lately. But it's a good sore.

I also made the decision to downgrade from the Fargo full marathon to the half. I'm kind of bummed about the whole thing but the way my injury is still bugging me, I just don't feel confident that I'll be ready for 26.2 miles by mid-May. I'm ok with putzing my way through a half, and maybe treating it more like a training run than an actual race, but I can't do that for a full. So fingers crossed that I'll actually be able to run a half by May!

Tuesday - Pilates HIIT & ab workout, about 30 minutes. Feel the burn! The best news is that I had an appointment with the orthopedic doctor, and he doesn't think I have posterior tibial tendonitis! He thinks I injured my peroneus longus at the insertion point on the inside of my foot. He did a pressure point test, and I kind of wanted to punch him when he hit that spot. Mystery solved! It makes total sense though, since that's the issue I've been dealing with since October. I didn't know that that tendon ran under the foot and into the inside, but apparently it does. 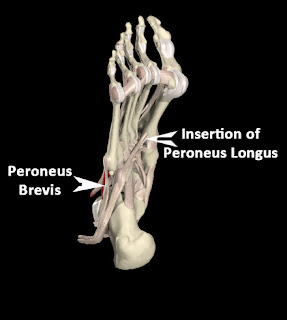 We're going to do orthotics to get my feet in the right spot function wise as he said I have "the worst feet he's ever seen on a 31 year old". Lovely. He also gave me a little PT move to do that feels like magic. The best news: I can start running again! Easy, and probably best on my treadmill for awhile, but running is running!

Wednesday - Despite getting the ok to run from my doc, I figured I'd be kind to my body and do a few more days of the bike and PT exercises before easing back into running. So 55 minutes of cycling this morning, followed by pilates leg day.

Thursday - My foot was feeling like 100% on Wednesday evening, so I thought I'd give it a whirl on the treadmill for an easy 3 mile run...and it hurt. It was stiff in the morning, but I did the little PT stretch the doc gave me, and it was feeling good! I did 5 min of walking to warm-up, then started cruising at around 5mph. Not fast by any stretch of the imagination. But there was still some strain in the inside of my foot. It actually started to feel better about 1.5 miles in, but afterward and for the rest of the day it's been on and off sore. Mostly up into my ankle, which is kind of different. Also, frustrating as hell.

I also did a 28 min PIIT (Pilates Intense Interval Training) workout. What a work out! I ended up taking 2 showers today. Lesson learned.

Friday - Pilates arms & back. March started a new calendar on Blogilates, and Cassie switched up some of the days we do certain body parts, so even though I already did arms & back this week...I'll do them again.

Well, at the end of the week I still feel like I'm in no-man's land with whatever is going on with my foot/ankle. I told my husband that I think maybe my doctor was wrong and doesn't know what he's talking about. He laughed and said that that's what all his clients say. He works with disabled people, some due to mental health reasons. I'm not sure if he was taking a pot shot at me or what. I don't know if I should continue to try to run, or go back to the bike and continue to rest it.

Or maybe I should just throw in the towel, eat a bucket of ice cream and call it a day. That's sounding pretty good at this point...