Movies and Running, Running and Movies

Can you guess what I did this weekend? If you guessed watched movies and went running, then you get a gold star!

This weekend we had nothing planned, but somehow "nothing" turns into "something" pretty quickly.

Friday night we decided to just relax at home with a bowl of popcorn and the movie "Birdman". Apparently it was nominated for all kinds of awards. I thought it was just kind of weird. A little sad, too. Then I fell asleep at the end, and we had to re-watch the last 5 minutes or so because Travis said it was the best part. Hey, I can't help it if I was tired! 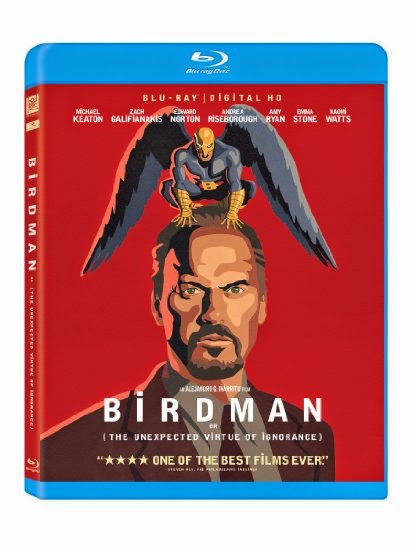 On Saturday, Travis had to go north to measure some guy's shoreline for a dock that he wants to buy from my father-in-law. He sells docks, so this isn't really weird or out of the ordinary.

I decided that morning to take down the mini blinds in our bedrooms and wash them. This turned out to be a bigger project than I had planned because, guess what? That's a whole lot of plastic to dry off, and where do you hang them while they're drying? I ended up lying them flat on towels in our bathroom, hoping that would dry them a bit.

While they were "drying", I thought it would be a good idea to Windex our bedroom windows. We have tilt-ins, which makes cleaning the second story windows much easier. Wonderful idea for the inside, but given that it was still only 13 degrees outside...not such a great idea. After my spray of Windex froze to the first window pane, I decided to give that up for a warmer day.

My blinds still hadn't dried, so I hung them up wet and used a towel to dry them. Getting water all over my clean windows in the process. Hmm, yea. Spring cleaning fail.

After all this non-sense, I decided that Emily and I should go on a day date to the movies to see the new "Cinderella". I had some reservations because the previews looked a little scary, but she loved it! The only part that was actually scary was when Cinderella has to rush back from the palace before midnight. But Emily did great and just wanted to sit on my lap until it was over.

On Sunday, I had a long run on tap first thing in the morning. My new plan with Runners Connect has me running my "easy" runs at a very slow pace of 9:35-10:20 minutes per mile. Honestly, this is so hard for me! I'm used to running closer to 9:00 min/mile on my long runs, so to slow down that much makes me feel like a turtle.

Also, I am a little prideful on this one. I feel like people are driving by me thinking "gosh, she is running so slow!". I know this is ridiculous and no one can tell, nor do they care. But it's just something I have to get over.

I managed to average just at 9:33 min/mile, mostly hanging out at that 9:35 except 2 faster miles. It's probably a good thing that I did run a bit slower. RC also has me doing a lot more strength training routines, including a circuit training workout. This includes things like mountain climbers, burpees, v-ups, lunges, etc. with 3 staggered 800m jogs in between. While that's only 1.5 miles, it wore me out.

I didn't even think about the repercussions of doing this on Sat, but I think I was still pretty tired Sunday morning! I ended up taking a pretty long nap in the afternoon. Even before lunch, Travis asked me if my run was harder than normal because I looked tired. Geez, thanks hubby!

I have circuit training planned again for this evening, so hopefully my body will start to adjust and get stronger. ASAP!

We're in a bit of a cold snap right now, with 6-10 inches of snow (shut up!) in the forecast for later this week. I don't think I even saw 20 degrees on my long run. My water bottles froze! 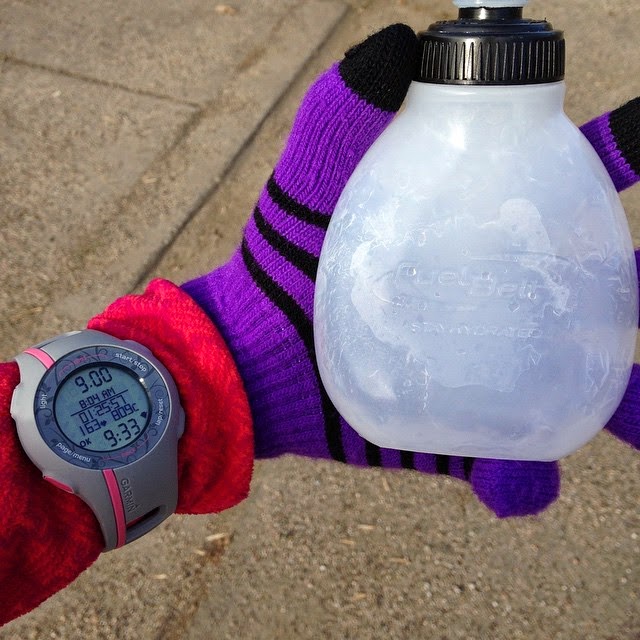 Hello spring? Can you come back please?

How was your weekend? Get in any good exercise or movies?
Posted by Ali at 10:11 AM