This weekend, Travis and I were lucky enough to be able to spend a night away in Duluth, about 1.5 hrs away from home. Grandma and Grandpa watched the kidlette, so we were off for a fun evening!

We stayed at the Suites Hotel in Canal Park. It used to be an old factory where ships could come right up to the building and load their shipment. It has long since been converted to restaurants and the hotel. The suites are nice with a separate bedroom, kitchenette, and living areas. There are all sorts of different rooms though, some without windows. Luckily we got a room with a window - even though the view was just of the parking lot!

They've kept the "industrial" style and left a lot of duct work and piping exposed. You can tell the hotel is older, but it was still nice and comfortable.

Canal Park is a really cool part of Duluth. There's lots of shops and restaurants to visit, and since the weather was beautiful we were able to walk from our hotel to some of the shops. We stopped at Northern Waters Smokehaus to pick up some smoked salmon pate. This little shop/restaurant was featured on Diners, Drive-Ins, & Dives. We brought it back to the room and enjoyed some wine with our pate.

For dinner we went to the Zeitgeist Arts Cafe in downtown Duluth. This is such a cool place! The food was amazing, and all the artwork on the walls is from local artists.

The dining room is upstairs, with the bar and some seating downstairs. That same night they had a local band playing in the attached theater, so while we were at the bar we bumped into a couple waiting for that show to start. The band seemed a little on the hippy side, and this couple only proved my point. Very 70's, maybe went to Woodstock, probably did a lot of drugs in their day type of people. But so nice! Good conversation.

We skipped the band (the Brothers Burn Mountain) and saw a movie instead. The Zeitgeist is a really fun place because not only do they have the cafe and theater, but they also have the "zinema", a little 2 screen cinema where they play movies. Think indie/Sundance Film type movies. We saw "The Last Five Years", which is based on a musical of the same name. Since it was based on a musical, the two main characters sing the entire dialog. I didn't think Travis would go for it, but he was a good sport and I think even enjoyed it. I thought it was good! Maybe not the type of thing I want to watch all the time, but good enough.

After a late night, surprisingly we woke up at 8 the next morning. I guess that's what happens when you have kids - internal alarm clock is permanently set. We stopped at another one of our Duluth favorites, the Duluth Grill. Also seen on Diners, Drive-Ins, & Dives, the Duluth Grill never disappoints. I had the vegetarian breakfast stir-fry loaded with veggies and egg whites accompanied by a caramel pecan roll that was nearly the size of my head. It was amazing! Travis and I split it.

When we were leaving, I snapped a pic of this guy in their parking lot garden. Yes, they grown their own veggies in the summer. 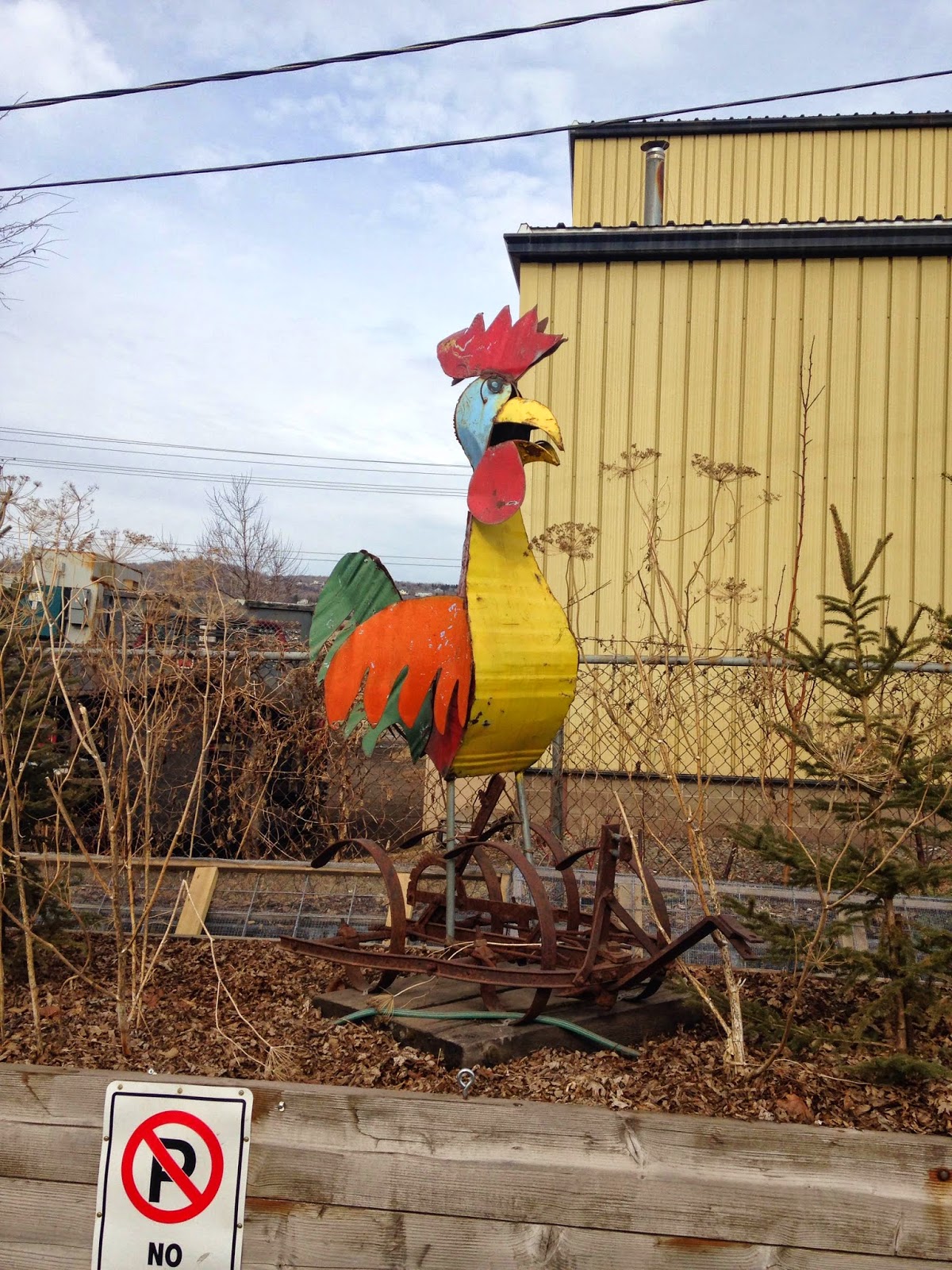 I guess he's there to stand watch and scare the birds away?

Did you have a good weekend? Have you ever seen a giant metal chicken?