In a follow-up to Why the UPS man hates me, I thought I'd share our Christmas card with the blogosphere. I typically send about 60ish cards. Not only do I receive, but I give as well! I really am looking out for our mailman, he's a cool dude. Not all are reciprocated, but I love getting Christmas cards in the mail. Who doesn't, right?

Here's our card for this year, with some of our JCP portrait photos: 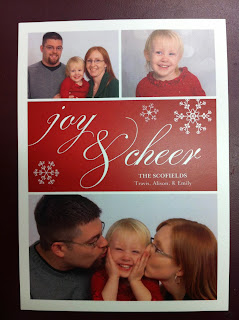 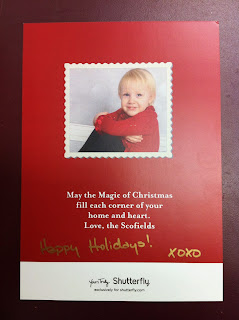 Aww, aren't we cute? I only ordered 50 from Shutterfly because even though I had a 50% off code, they were still expensive. Then I was worried that I wouldn't have enough, so I ended up making and ordering about 20 more from Walgreens. Surprisingly, I think the Walgreens cards are better in quality. That makes it easy for me to decide where to get cards from next year.

But, it always comes together and our house looks so nice when it's all decorated. Emily helped us with the tree this year, which was scary and hilarious at the same time. She got so excited, that she would run back and forth between the tree and the ornament bins trying to get as many ornaments on the tree as she could. Of course, most of them were all clustered on the same branch and needed some rearranging later. If she wasn't a fan of a particular ornament, she would just throw it back in the box and move on to the next one. I'm not sure how many times I said "Emily, you have to be careful!". I lost count. In the end, the tree is up, all the ornaments survived, and we had fun.