Just one of those weeks...

where nothing seems to be going right. I don't want to be a complainer so I'll just give you the highlights. After a great Labor Day weekend, I went back to work feeling refreshed and thankful for three days off. Who doesn't love that? Work was same old same old, but a bit more hectic since we had Monday off. The day after a holiday always seems busy and crazy! So I go home to relax, have a nice dinner and put my feet up after a long day. Boy was I in for a shock! I came home to green water. GREEN water. In the toilet, coming out of the bathroom sink, the kitchen sink, all of it. Oy vey!

Travis called his parents, who called their parents, and some other people to come fix our water. But since no one is a professional well-digger or water inspector, the best answer we got was "well just run the water and it should clear up." Ok, so that's what we did. All night long. Imagine my surprise when we woke up and had no water in our tank. Duh! No one really explained the mechanics of a well to me, and this city girl has definitely never had to deal with living on a well before! We drained our holding tank, so it had to refill. Then we had to drain the hot water heater, because some of the nasty water got in there too. Long story short, I had to take a shower elsewhere, was late to work, and came home to slightly yellowish water. Better than green, but definitely not clear! We're still working on the water issue as we speak.

Then Wednesday I was very much looking forward to getting off a little early at 4:30 instead of 6, so I could come home and relax after our water fiasco. Until I remembered our teller meeting was scheduled that night from 6 to 7. Whoops! Which led me to the dilemma of what to do for an hour and 1/2 until the meeting started. What does a girl do in small town Minnesota when she had time to kill? Go to the local feed and tack store!

Which leads me to the only highlight of my week. I have horses! Two to be exact. Travis's Dad has had these horses for awhile now, but no one does anything with them or knows how anyway. So he said "well their yours then, I'll pay for them but you can do what you like with them". Music to my ears! So now I have a 12 year old bay Quarter horse mare named Crystal, and a black and white Paint mare that we named Libby. And we don't know how old she is. 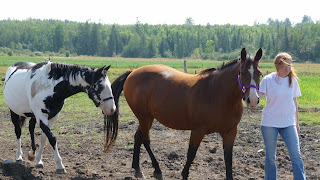 I wasn't paying attention when Travis took this shot, but here they are! 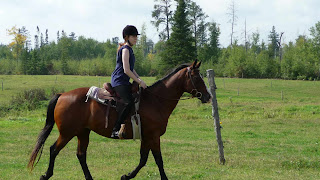 One of me riding Crystal. Please don't critique the riding, or the crazy English/Western clashing. Just say "oooo, pretty pony!" 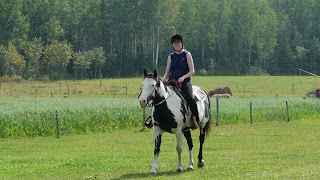 And here I am riding Libby. Libby is just walking right now because she has a weird crack in her hoof. The farrier said she'll be fine, she'll just have a funny looking foot for the rest of her life.

Of course I picked the best pictures of us to post, but let me tell you: the first day was quite a battle! Libby didn't like that I took Crystal away from her to ride, so she broke loose and ran around like a mad woman, mostly in the oat field (right behind us in the pic of me riding her). Then once we caught her, Crystal didn't want to be taken away from her and be ridden so she was horrible for 75% of our ride. Libby wasn't much better, but I didn't do nearly as much with her so the ride was short. Today Crystal was much better, but still had a little sass up her sleeve. I do have to admit though, after two years of not riding I am really sore today!

So that is the big news from Bear River! For a place that doesn't exist, we sure do have our share of excitement!
Posted by Ali at 2:09 PM