Labor day weekend is one of my favorite long weekends. I get an extra day off from work, I know fall is just around the corner, and there is usually a couple of good BBQ's to go to. We seem to be having a good stretch of nice weather, but who knows how long that will last! Everyone says that this uncharacteristically cool summer weather we've been having is not the norm, and usually they have warmer weather. Well, since I moved to the North Pole, I just don't believe what "everyone" tells me.

Even the trees have decided that it's fall, and time to turn their leaves. I wish I could have gotten some shots of the gorgeous trees on my way to work. There are several that are bright red, like red that I've never even seen before! I did make Travis stop along Highway 5 on our way to town to get a couple of shots, just so you will believe me. We were going to the wine store and then the grocery store, but that's a whole different story. So here are the trees: 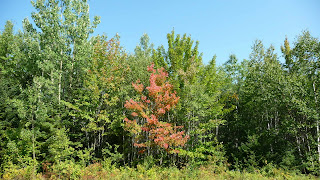 This one is actually just down the road from our house. 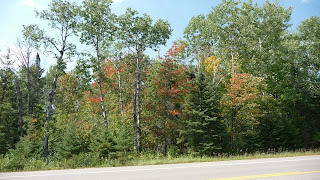 And this little group is along Highway 5

So before I have any naysayers point out all the green let me clarify: no, not all of the trees are turning yet, but we do have some here and there. Their favorite season is Fall too, and if I were a tree then these guys would be my friends :o)

Travis also caught this cool shot on his way down to Duluth on Wednesday. We've been having a lot of foggy mornings, and he caught this one right as the sun was coming up. It almost looks like the woods are on fire. I'll have to discuss with him later about safety and taking pictures while driving.

Now since we live out in the middle of nowhere, we've taken a new appreciation to good food. By no means are either Travis or I turning into gourmet chefs (ha! we know that I am definitely not!), but we can't just go out to a really good restaurant and grab a quick bite to eat. So we're trying some new things, and jazzing up some old favorites too. Recently Travis took a recipe that I've made a thousand times called "Easy Italian Stew" and livened it up with some fresh zucchini, peas, and green beans from Grandma Fran's garden and some big, beefy tomatoes. Basically the recipe is this:
1 lb ground italian sausage
1 cup elbow noodles
1 cup chicken broth
1 can white beans, drained
(we prefer great northern beans)
some kind of veggie, like peas, carrots, green beans
lots of mozzarella cheese

You brown the ground sausage in a skillet, add the elbow noodles and chicken broth and bring to a boil. I actually really like using sausage here because it's much less greasy than beef, so it makes me feel like it's better for me. Whether or not it is, who knows. Anway, after your skillet is boiling, you add the white beans and veggies to it, simmer for 10 minutes, then serve. It's so easy! We typically top it with the cheese while it's still in the skillet, and then I like to add diced tomatoes to mine, too. But since we had such great fresh veggies, Travis added those instead of a random vegetable and cooked tomatoes in it. I think he only did 1/2 a cup of broth too. I know, I know, the recipe is for a "stew" but I don't really like it really liquidy so we do this a lot. Then he garbled it up with tons of mozz and tada! 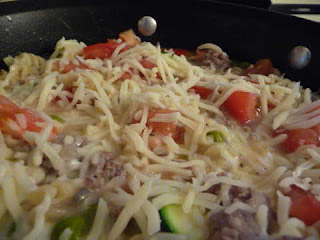 This particular day we also used radiatori pasta instead of elbow. Eh, whatever! You can also add some italian dressing when you're browning the sausage to give it a little extra kick!

Those are the adventures we've been on lately, I hope everyone has a great Labor Day!
Posted by Ali at 2:09 PM