Book Review: All the Light We Cannot See

It's been awhile since I've reviewed a book here on my blog, but don't let that fool you. I'm still reading like crazy. I've read 30 books so far, have one I'm in the middle of and started an audiobook over the weekend. What can I say? Reading trumps most things.

Recently, my book club read All the Light We Cannot See by Anthony Doerr. 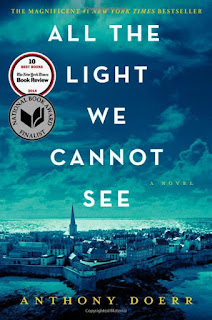 A brief snippet from Goodreads: "...about a blind French girl and a German boy whose paths collide in occupied France as both try to survive the devastation of World War II."

This book has been on the New York Times Bestseller list, won the Pulitzer Prize, and the Andrew Carnegie Award for Excellence in Fiction.

So...a good book, yes? We were all very intrigued and ready to read and discuss it.

While I did really enjoy the short chapters in this book, which made it easy to read while traveling, at work, before bed, etc., each chapter flip-flopped between the two characters, Marie-Laure and Werner. At the beginning, it was hard to get into because I felt like I wasn't getting enough of each story to really keep me engaged. Occasionally, there were chapters from a 3rd narrator as well - von Rumpel, a Nazi officer in search of the precious Sea of Flames diamond.

Wait, you didn't know that this book centered around a diamond? Apparently, it kind of does. Marie-Laure and her father have to flee Paris with 1 of 4 copies of the Sea of Flames Diamond (or maybe the original?), previously held at the Museum of Natural History where her father was a locksmith. They go to Saint-Malo, where her hermit great-uncle lives.

Werner grows up in a mining town, where he stumbles upon some radio parts at the town dump and eventually hones his craft of building and repairing radios. He is sent to one of the Nazi youth academies and gets to work on a pet project of building a radio transceiver. He is eventually thrust into the army at age 16, the school saying that he lied about his age, so that he could help a small outfit find rebel resistors who broadcast the whereabouts of the Nazi Army and other secrets over the radio. This takes him all across Europe from Russia to Germany.

Eventually, his travels bring him to Saint-Malo, where they are receiving transmissions from a hidden radio broadcast - which just so happens to be Marie-Laure's uncle.

Without giving too much away, this is obviously where their stories come together. However, it's not until late in the book. The feeling that I had, as well as the other members of my book club, was that the first half of this story was long, drawn out, and frankly - not very interesting.

I disliked the ending, but for my own reasons and ones I will spare you. Overall, I rated this a 3.5 star on my own scale (since Goodreads only does 3 or 4), because although I liked the story once it was over, it took so long for me to actually be interested and like where things were headed.

So, maybe I just don't have good taste. What do I know? A lot of my friends really loved Doerr's novel.

Have you read All the Light We Cannot See? Is there another book you disliked that everyone else seemed to love?
Posted by Ali at 10:14 AM