If you know my husband, you know that one of his passions in life (after me of course!) is music. He plays guitar and loves to jam out whenever he's given the chance. Such a chance came along a few weeks ago when a friend from work invited him to come jam with their band, and maybe be the sound/lighting guy. Through a succession of events, Travis became a member rather than being behind the scenes. The name of the band is, you guessed it, Sweet Freedom. They're a local country band that plays quite a bit around here.

Uh, yea, that's right - I said country. Yes, I'm still talking about my husband. Being in a country band. Does anyone else think this is funny? I sure do! For the entire time I've known Travis, he has always hated my country love affair, saying that country music puts him to sleep. But hey, when opportunity calls then you answer, right? So he's been having fun going to practices, and they're having their first gig on Memorial Day weekend at a lodge up north from here.

Of course that means that they needed to take publicity photos, right? Of course! Actually they'll be playing at the local fair this summer and the fair people wanted a photo to put in ads. So that makes a little more sense. Since they did this on a Sunday afternoon, I decided to go along and meet everyone. The lead singer also happens to have a bunch of horses and we were going to his house - bonus!

Lead singer's wife was actually doing the photographing, but I figured I'd bring my camera along to take a few for our own personal use. I got a bunch of shots, but it was so bright and sunny that a lot of them were washed out or just poor lighting. Here's a favorite with decent lighting: 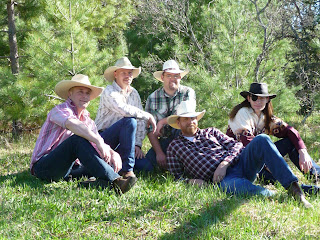 And a great blackmail photo if ever I need one: 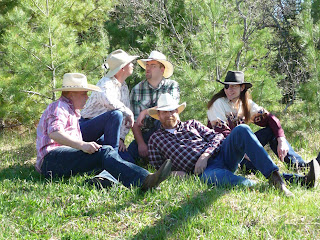 I have no idea why they were making smoochy faces at each other, but this is hilarious! That's Sonny with Travis, he works with us as well. He can be quite a ham!

The idea was to take pictures of them by the waterfall that we went to, which was pretty cool. Unfortunately not many of those came out, but here's the waterfall. 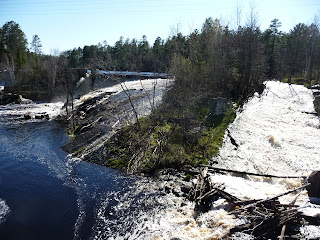 It's hard to see, but there is a big one in the back left that is original. The falls on the right were created by a log dam. 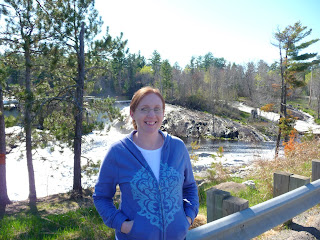 And here's me in front of them! It was quite windy, and this was after traipsing all over the area to get good shots. I was a little pooped at this point!

In other news, today is Trav's 27th birthday! I can't believe he's that old, considering we met when we were 20! (I know 27 is not old, just go with it) It feels like just yesterday we were celebrating birthdays in the typical college style - a la a cheap dinner and too much booze! Instead we BBQ'd and had his family over. Tonight we're just going out for dinner. Here's Trav with his new video camera for lots of baby videos! 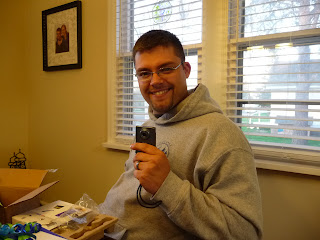 Thanks Mom and Dad!

So that's all the fun and exciting stuff we've been up to lately. I leave you with my 30 week bump picture. Only 10 weeks left! 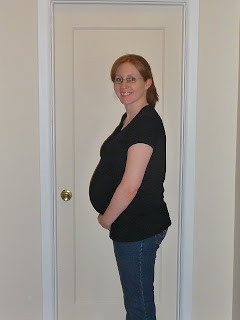